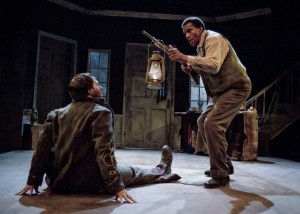 A superb production of an outstanding play opened at Taproot Theatre this weekend.   The Whipping Man by Mathew Lopez, directed by Scott Nolte, got everything right:   the script, the directing, the acting, the accents, the set, the lighting and the sound.

Significantly, the play opens in Richmond Virginia (the Confederate Capitol) the day after General Lee’s surrender at Appomatox which ended the American Civil War.   Anxiously anticipating the arrival of Federal troops, Richmond is in precarious limbo because it is the first day that Black slaves in the South were legally free. Three people spend three days, from April 13th to April 15th in the abandoned war-ravaged home of a prominent Jewish Family.

Each person, two ex-slaves, Simon and John, as well as a Confederate officer, Caleb,  the son of the master, are forced by internal and external forces to hole up, while the chaos of the surrender and emancipation play out.  In keeping with the custom in the South at the time, the slaves had adopted the Jewish religion and traditions of their owners.  As it is spring, setting the play in a Jewish household provided the author with the perfect ritual to celebrate Emancipation:  Passover and a Seder, when Jews celebrate the emancipation of the Jews from Egyptian slavery.

While reading the Jewish prayers recounting Exodus at the Seder, the older, wiser ex-Slave, Simon, intersperses Christian Negro Spirituals, usually sung at Easter, with the words of the civil rights era.  Needless to say the two ex-slaves are more enthusiastic about celebrating this Passover than the atheist Confederate officer.  During the Seder, the secrets of their complex back-story are revealed with catastrophic consequences.

Choosing these three specific characters, the author brought a lot of subtlety to the script.  Emanating moral authority Simon, brilliantly played by William Hall, Jr. is old, wise, illiterate but articulate, realistic about his situation and loyal to his master.  To create a generational conflict the author has a younger ex-Slave, who is educated and highly literate, hot-headed, dishonest and suspiciously fair-skinned.   Tyler Trerise played this part superbly.  Compounding the conflict, the Confederate officer, Caleb played by Ryan Childers,  is not a candidate for the Klu Klux Klan but relatively progressive, more or less a decent human being, but caught in the shifting power dynamics of the time.

Although a lot of has been written about the complicated relationships between masters and slaves/servants, few have done it as well as The Whipping Man.  All the predictable issues are present:  loyalty vs betrayal, forgiveness vs. revenge, the fragile intimacy caused by servant’s and master’s families living in the same house for generations, the strange relationships between a master and his bi-racial children, the suspicious “love” between sexual partners of different races, the impossibility of being a good master when the power dynamics are not equal.

Although by this description anyone would think that the play was didactically written, on the contrary,  it was not.  The exposition was swift, the plot moved at lighting speed  with witty, funny, zingy dialogue.  All the actors had the necessary comic timing and vocal ability to deliver the lines with panache.  All the technical aspects of the play, the sounds of war, thunder and menace interspersed with Bluegrass music, the set, all by Mark Lund, served the production extremely well.

Whipping Man affected me the same way the movie Shindler’s List did.   It dealt with profound evil, but with enough humor and humanity to make it watchable, but it is not for the faint of heart.  The show is not recommended for anyone under 16.