Edith can Shoot Things and Hit Them. 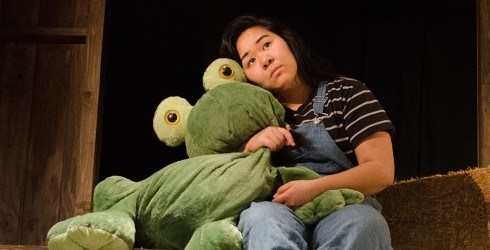 Edith Can Shoot Things and Hit Them by A. Rey Pamatmat opened at Seattle Public Theatre on Friday.   It tells the tale of two minors, age 12 and 16, who have been abandoned,  by their father,  to fend for themselves,  after the death of their mother.  Complicating the situation is the gay boyfriend of the 16-year, whose fundamentalist mother  throws him out of the house, after she ferrets out that he is actively gay.

The strength of this play was in the acting, particularly Sara L. Porkalob as Edith,  who I was surprised to learn,  is in her 20’s,  not in her teens.  With excellent comic timing, she expressed the volatility of a 12 year-old; feeling like she had to take adult responsibility one minute,  but then so fearful that she resorts to violence and pretending her stuffed frog is a surrogate mother.  In addition, the costumes, by KD Schill were spot-on including a Catholic school uniform complete with saddle shoes. The music and sound complimented the turbulent emotions of the teenagers.

Although the writing of the dialogue and the monologues was superb at times, the lack of a coherent structure and the lack of follow-through on the basic premise, detracted from the serious emotional topics in the play.  The play included a lot of extraneous anecdotal material, which did not advance the plot and neglected dealing with certain realities, which if mentioned could have driven the plot in a more focused way.  In my opinion, the play needs a very serious re-write.

For example, after setting up a situation of two Filipino teenagers abandoned in a farmhouse with very little money by their widowed doctor father, the author did not really deal with the logical consequences.  Where is the extended family?  Where is the church and ethnic community? Where are the social services,? The school counselors?  Why doesn’t the doctor father have enough money to hire a housekeeper?  By neglecting to answer these questions, the playwright created a very contrived plot which just did not make sense.

Although I had a few laughs, but far fewer than the rest of the audience, I was disappointed by this play.