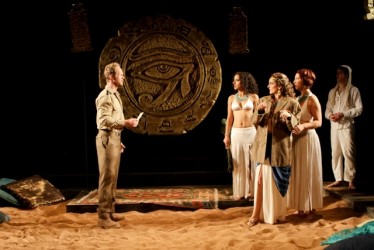 The beginning of Seattle Shakespeare Company’s Antony and Cleopatra is a bit disorienting.  Basically, it starts off with an orgy.  Girls in white bikini tops gyrate in the Egyptian sand while handsome young men look lustily on.  Jarringly, the scene next shifts to an austere gym in Rome where the young Octavius Ceasar jogs in place, lifts weights, and works out with a medicine ball while being debriefed by his always serious advisors.  Things keep shifting back and forth from place to place, culture to culture, while spiraling down to an inevitable conclusion—all-out war between two sides that cannot understand each other.

I am fairly certain that these opening scenes do not reflect how Shakespeare originally staged the play, but one of the reasons his works have stood the test of time, I think, is that they invite innovation.   Sometimes for better, sometimes for worse.

Director John Langs’ production hits all of the standard Antony and Cleopatra notes and then plays them even louder.  The show is staged as the quintessential clash of opposites—the lusty, Egyptian east versus the stodgy, Roman west; passionate femininity against militaristic machismo.  These interpretations are all completely reasonable within the bounds of the text.  I just personally wish that one day, someone would try something a bit new…

But, that’s just me.  What Seattle Shakespeare Company does with their Antony and Cleopatra  they do very, very well.  Jennifer Zeyl’s set design and Pete Rush’s costumes are all elegant and crisp, as are the choreographed fight scenes, complete with aerial touches.  Composer/Sound Designers Robertson Witmer’s and Evan Mosher’s soundtrack is quite eclectic, ranging from bits of death metal to pieces from Peter Gabriel’s Passion album.

What may stand out the most, though, is the acting.  Each performer does a wonderful job.  Dan Kremer as Lepidus, Mike Dooly as Pompey, and Charles Leggett as Enobarbus particularly excel in their supporting roles, while the core characters of Octavius Caesar, Mark Antony, and Cleopatra are each handled expertly by Darragh Kennan, Hans Altwies, and Amy Thone.

Most of all, the entire production coalesces—opposing forces and all—into a very believable, understandable and well-paced production; and with Shakespeare, that can be very hard to do.

Antony and Cleopatra.  By William Shakespeare.  Directed by John Langs.  Seattle Shakespeare Company at Intiman Playhouse.  November 1-18, 2012.  Tickets and information at www.seattleshakespeare.org or 206-733-8222.