The Glass Menagerie–Tennessee Williams Returns to the Seattle Rep 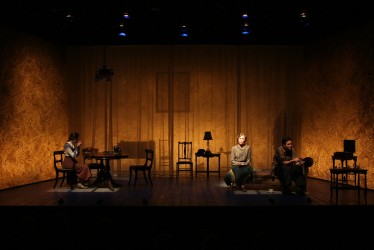 It has been twenty-four years since the Seattle Repertory Theater has mounted a Tennessee Williams play.   Artistic Director Jerry Manning has decided to return to this American icon during their 50th season, with a beautifully staged Glass Menagerie.  It has proved worth the wait, for this is nearly a flawless production of one of Williams’ most personal plays.

Arthur Miller once pointed out that while Streetcar somehow has become difficult to successfully pull off for modern theatergoers, The Glass Menagerie still works wonderfully.  The proof is all on the stage at the Leo K. Director Braden Abraham has kept the show simple and tightly focused.  Watch for how much he can get out of a couple sticks of chewing gum!  The playing area is really reduced to the downstage third—entrapping the Wingfield family and their unsuspecting Gentleman Caller in a very tight space indeed.  Suzanne Bouchard takes on the matriarchal role of Amanda.  In the program, she describes her character as a “conventional woman who wants a conventional life for her very unconventional children.”  It is tragic, no-win situation and Bouchard successfully captures the anxiety and despair of the role.  She moves from coquettish Southern charm to explosive wrath in a heartbeat, and it all makes perfect sense.

Ben Huber has the dual role of the narrator and son, Tom.  Opening night found him a bit stiff in the earlier scenes, but by his third monologue he seemed to find his rhythm; his final confrontation with his mother is harrowing.

Brenda Joyner plays the daughter, Laura Wingfield.  I recently saw her playing Lavinia in the upstart crow collective’s production of Titus Andronicus, and I am convinced that we have a real budding star on the Seattle scene.   The depth of the pain she experiences in Laura’s stilted, lonely world—so much of it simply unexpressed in words– is nearly overwhelming.

Eric Riedmann is the long awaited Gentleman Caller, Jim O’Connor. He suitably captures the character of a young man who is nearly always charming while being simultaneously blindly self-consumed.   Williams has been described as an average playwright but one hell of a scene writer.  This is debatable; but when Laura and Jim were finally brought together in the closing scene of The Glass Menagerie, the opening night audience was on the edge of their seats.  It was flat out spell binding.  Amazing that a 75 year-old play can still speak so clearly to today’s audiences.

L.B. Morse was the lighting designer who frames the family tragedy in shadows and candle glows.  It was costume designer Frances Kenny’s job to make sure the Wingfield women looked as good as their Depression-constrained budgets would allow, when the very special dinner evening arrived.  Laura’s music box melodies were composed by Obadiah Eaves. Indeed, this small gift of a play, as fragile and unique as a glass unicorn, seems to have been gently nourished by all involved.  It plays through December 2. Information at seattlerep.org 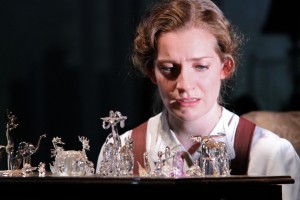