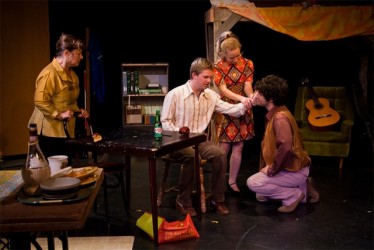 I’ll be damned if I am going to feel sorry for any guy who is about to sleep with me.

Produced by Local Jewel, an excellent production of BUTTERFLIES ARE FREE is running at Theatre 4 in the Center House Armory at Seattle Center.  Written by Leonard Gershe in the 1960’s, this production was set in 1972, an era before gay rights, disability rights and before  the concepts of “enabling” and  “control-freak” had entered main-stream society.

The plot revolves around a young well-educated blind man, Don Baker, trying to live on his own in the lower Eastside for the first time, who has a sexual encounter with Jill, a   19 year old free-spirited divorcée next door neighbor.

His helicopter mom arrives post-coitus and tries to protect him from this challenging situation and get him to move back home.    Instead the girl confronts the mother who has a major epiphany about how her help is not help and in the end it is the mother who persuades the son to keep on trying to live on his own, pursue his dreams and experience all of life’s challenges.  The girl also moves some psychic distance when she realizes that maybe she should try a real relationship with a decent man, even if he is blind, instead of the rude conceited jerk in her life.

Although the play was  really only a few people  “sitting’ around talkin’” the dramatic tension started immediately as the blind guy adjusts to having a friend and  the friend learns about the awkwardness of socially interacting with a blind person for the first time.  The dialogue was funny, sensitive and ironic.

All the hallmarks of success were in this production: a great script which drew on a universal conflict-a mother letting go of her child in order to let him grow up, but in this case the conflict was heightened by the child’s blindness.  The actors, especially  Jesse Baldrige as Don, Charissa J. Adams as Jill and Eileen McCann as Mrs. Baker the mother,  as well as the director served the script well.  Butterflies are Free is a must see.

One of the best parts of the evening was the pre-show music, which featured songs by the Lovin’ Sponful, Bob Dylan, Hair, and Credence Clearwater Revival.  For the baby-boomers in the audience, and I was probably the only one, it really set the tone.