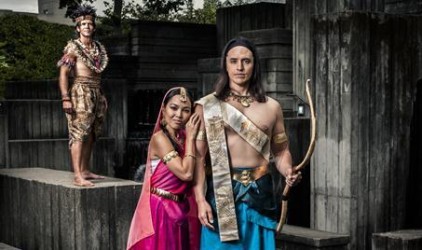 As the author of the program notes writes for ACT’s current show, The Ramayana is “the best known, the best loved, and the most influential work of Indian literature.”[1]

Hence my excitement for seeing this play, and apprehension about reviewing it.

Many students of theater have studied or at least heard about another Anglophone adaptation of ancient Indian literature, Englishman Peter Brook’s 1985 staging and 1989 film of The Mahabarata, a multi-thematic, epic Indian poem.  Some loved it, some hated it, and the most heated responses emerged along a cultural divide.  Politely put, many asked:  Should a Western man be able to adopt an Eastern mythology?  How can he possibly know enough of the traditions?  Isn’t this cultural colonialism?

I have not studied Brook’s Mahabarata or its critical reviews in depth, and so it is not for me to speculate.  What I can say is that the legacy of that play was enough to make me nervous about ACT’s latest endeavor, their adaptation of one of India’s oldest epic poems, The Ramayana—a tale of the younger years of Prince Rama, avatar of the Lord Vishnu, as he deals with familial and political strife, his wife’s kidnapping, and the war that ensues.

As ACT states in their press, “in an unprecedented cultural outreach in support of the production,” producers invited members of the Asian community for input on the play and its related events.   Their work has resulted in a string of lectures, dance shows, art exhibits and vendor markets that enhance the performance experience and further illuminate the contexts of the ancient source material.   In fact, it seems  impossible to get to your seat without passing by a number of artisans and educators happy to discuss the work with you.  If this was a cultural sensitivity test, I think that they would pass.  And the play itself?  It’s very long, but very good.

In Ramayana, ACT successfully creates a vivid world inhabited by kings and queens, gods and demons, giants, monsters and talking animals.   Scenic Designer Matthew Smucker’s stage is covered in hypnotic shades of blue and green and accented with graceful brushwork patterns.  Costumer Melanie Burgess’s range of designs—from royal robes for humans to uniforms for monkey soldiers—are both festive and elegant, and Mary Louise Geiger’s lighting design is so well done that even the shadows  seem to take on a life of their own.

The play is superbly acted and full of energy.  Truly an ensemble piece, each performer clearly displays the sensitivity and versatility necessary to make such a sweeping show a success.  Some standouts are Anne Allgood and Brandon O’Neill in their comedic roles of demon serpent and monkey leader, and Rafael Untalan’s portrayal of Rama, the god in young human form, is both sensitive and convincing.   Comedic bits, dance routines and fight sequences help keep the nearly 3-hour-long show moving.

But,  true appreciation—and understanding—of the play requires audiences members to leave their comfort zones, so to speak.  In his program notes, author Mott Greene rightfully warns that the world of ancient India is not at all like our own, and so we must try to “understand specifically how different this moral universe is from that which Westerners have grown up.”[2]  This is especially true of one of the last scenes of the play.  I won’t give it away, but I will say that I admire ACT for pulling none of its punches when condensing the material.

So.  Is this an “authentic” experience?