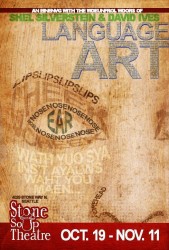 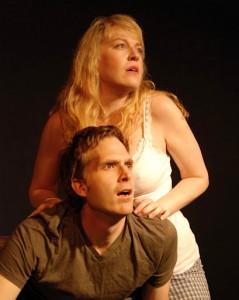 Jaryl Draper and Erin Ison as husband and wife in The Lifeboat is Sinking.

Director Maureen Hawkins has assembled eight short one acts written by Shel Silverstein and David Ives that focus on our reliance on language to aid us in finding love, peace, understanding and comedy in our world today.  The six member acting ensemble features a number of Stone Soup regulars and a couple new to the small theater occupying a space in Wallingford that once offered pet grooming services.  The program is definitely a mixed bag, but provides quite a few laughs and some admirable linguistic gymnastics.

Ives’ “The Universal Language” opens the evening and might be the trickiest of the lot both for the actors and the audience.  The plot involves the forging of a brand new language and the surmounting of formidable obstacles that get in our way of really connecting with another being.  Lots of fun word play and good energy keep this longer piece moving.  James Lyle and Sarah Rose Nottingham are the teacher and student that may or may not be starting a whole new way of communicating.

Shel Silverstein’s “The Life Boat is Sinking” features Jaryl Draper and Erin Ison as husband and wife involved in some serious game playing as they work at discovering what are the real parameters of their marriage.  This one perhaps does more with the power of language than any of the other pieces.  Ison is particularly effective as the wife that wants to be sure she gets to stay in the sinking boat of their relationship.

Some of the Silverstein pieces seem a bit silly and over-extended, but the program really hits its stride in its final piece, Ives’ “Sure Thing.”  Here Jaryl Draper and Erin Ison are a twenty-something couple meeting for the first time at a coffee bar.  The ingenious set-up allows them to rewind time again and again until they finally are able to say the right things, the right way, at the right moment.  It’s the traditional “meet-cute” at its finest.  The two actors pull it all off with aplomb!

Indeed the ensemble is focused and energetic throughout; it is a lot of fun watching them hustle about the stage between acts, building the next set.  Bridget A. Natale was the set designer in charge of establishing eight different worlds in a very short time and small space.