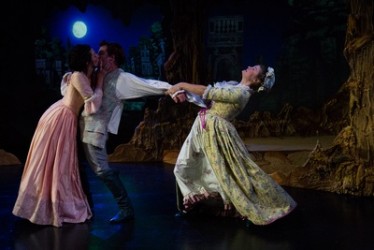 Sound Theatre Company’s latest production is Tony Kushner’s “The Illusion.” Adapted from the 17th century French playwright, Pierre Corneille’s “L’Illusion comique,” this strangely interesting play runs the gamut in terms of the many theatrical styles and genres of which it makes use (ie. Pastoral, light comedy, farce, and tragedy), including a meta-theatrical structure.

It tells the story of a father named Pridamant who, now growing older and sickly, seeks the magical help of a cavernous dwelling sorcerer, Alcandre, to help him relocate the son he had banished from his home many years before.

The sorcerer offers to conjure up scenes from his son’s life throughout the years, and the comedy slowly turns into a tragic tale with lots of abrupt jolts and disconcerting twists and turns along the way.

It is a terrifically written play that deliciously spices up the classical world of Corneille with a contemporary seasoning, and Sound Theatre Company’s production of Kushner’s 1988 adaptation, is equally delightful.

The acting was strong across the board, but if I had to pick someone who really stole the show, I would have to say it was Hannah Mootz in her role as the maid. Mootz had spectacular facial expressions and a wonderful sense of comic timing; but truly, everyone in the cast did a great job.

The spectacular performances of the cast were equally matched by the spectacular set, costume, and projection designs of Bryan Boyd, Deborah Sorensen and Suzi Tucker. All three designers successfully combined the multiple dimensions of the illusive and mystical theatrical world conjured up by Kushner and Corneille with balanced elegance.

Running at just under two hours, which includes a 15-minute intermission, “The Illusion” is the perfect length for an enjoyable night of great theatre – theatre that is innovative, introspective, and entertaining.

“The Illusion” plays through August 26th at Center Theatre (305 Harrison Street). It is produced by Sound Theatre Company (www.soundtheatrecompany.org). For tickets: www.brownpapertickets.com/event/257760 or call 1-800-838=3006.