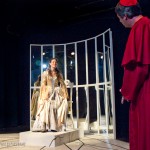 Sell me an Indulgence

“I’m becoming Catholic” is the idiom in Hamburg (a Northern German Protestant City) for “I’m going crazy”.  The Abdication by Ruth Wolff reminded me of this idiom.  A play about self-reflection, it is framed in a Vatican examination as to whether Christina, the Protestant former Queen of Sweden,  no stranger to craziness herself,  should be officially received into the Roman Catholic Church.

Christina, played exquisitely by Gretta Stimson, was the daughter of the great Gustavus Adolphus,  King of Sweden,  the most powerful military defender of the Protestant cause.  Her abdication of the throne at the age of twenty-seven and subsequent conversion to Catholicism was a political victory for the Catholics and a betrayal and defeat for the Protestants.

Christina, who became queen at six years old in 1632, recounts her childhood traumas to Cardinal Azzolino (played by Tim Brandt) ,  while he “examines” her suitability for conversion.  Initially hostile to him, the sessions end up being very confrontational, rather inquisitorial and very like pre-Oprah psycho-analysis of the 1950’s and 60’s.   At the end of the play, she does have a religious experience, finds self-love for the first time through romantically falling in love with Azzolino.

One of the flaws in the play is that although Azzolino reciprocates her feelings, their relationship remains unconsummated.   The rationale is that, with the current Pope dying, Azzolino is the preferati-the next in line; however, givenVatican morals at the time, being Pope did not preclude having a mistress, or two or three… ad infinitum.   Although dramatic tension was created by the sexual intrigue, in the play as in reality, Christina was a cross-dresser, probably lesbian and possibly a hermaphrodite, so the device to advance the plot did not ring true.     That it might have been confusion about what sort of love she felt for the first person in her life who actually listened to her and comforted her, was not explored in the play.  In reality, she and Azzolino remained life-long friends and he was present at her death-bed.

Although it could have been, this was not a two-person play, and the playwright avoided rendering it into a live radio play.  Instead, actors acted out the flashbacks episodes, rather than just have Christina recount them to the Cardinal.  Cleverly, two other actors also played Christina in the flashbacks; Tina (played by Corey Lynn Atencio) the good feminine, sweet, obedient and heterosexually-inclined Christina and Chris (Kalee Smyth) the bad, rebellious, outspoken, non-conformist, homosexually-inclined Christina.  Good Christina looked like a virgin, Bad Christina looked like Pipi-Longstocking, another mal-adjusted Swedish orphan. In a few flashback scenes where Christina has great internal conflict, all three Christinas talked and argued with each other.

In keeping with this idea (that one’s personality has many different sides) the set was a concave panel of mirrors, which worked well symbolically as well as technically.   It created the illusion that the small space was much larger, flooded the stage with light and could be used to great effect for every scene in the play, from the opulent Vatican to a bedroom at the palace in austere Stockholm. Since the play was on a low-budget,   it was a credit to set-designer Julia Welch’s creativity and aesthetic sense.

The strength of the script was in the dialogue and the language, there was some very witty repartee between the Cardinal and Christina as the two strong characters have a battle of wills.  Without a dull minute between the two, they fight, connect and in the end both get what they want-she becomes Catholic, he does not betray his vow of chastity.  The actors, Gretta Stimson as Christina and Tim Brandt, as Cardinal Azzolino, were up to the task for these challenging vocally demanding roles.

Since the director, Rachel Wolfe, used creativity and had a coherent vision, the production rose above the  material and it was a fabulous show well worth seeing.  Along with powerful staging and a dazzling set, the acting was strong not just by the leads but also by Oxenstierna, the prime minister, played by Rhys Henley and the rest of the cast.  Vocally the actors knew how to play powerful emotions in a small space without shouting or screaming (something not every actor in Seattle can do.)  Although the nature of the relationship between Christina and Azzolino was not historically accurate, the background of 17th Century politicized religion and religious politics was accurate.