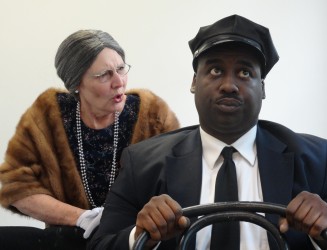 Two Outsiders in the South, Before, During and after Civil Rights.

Driving Miss Daisy, originally a Pulitzer Prize winning stage-play by Alfred Uhry,  recounts the 25-year relationship ( from 1948-1973) between two outsiders in the South, specifically Atlanta.  Boolie, the son of Miss Daisy, insists on hiring a chauffeur for his uninsurable accident prone mother, a wealthy Jewish widow.    The chauffeur Hoke is an an amiable, astute African American widower with young grandchildren.  But the decision to hire Hoke is over Miss Daisy’s  metaphorical dead body.

Hoke and Miss Daisy go through various stages of their relationship from outright hostility to acceptance, but both characters learn valuable things from the other.  For both blacks and whites, illiteracy was very high in the South in those days, but Hoke, who knows only the alphabet, trusts Miss Daisy enough to admit it, resulting in  Miss Daisy, a former school teacher, teaching him to read and write.

After her synagogue is bombed, Hoke “speculates” about  just who the perpetrators might be, and recounts some of his tragic coming of age experiences growing up in the South.  At 11 years of age, he saw his best friend’s father hanging from a tree, lynched by the Klan.   In the end, the two really only have each other for company, even after Miss Daisy goes gaga and is moved to a retirement community.

Although the actors seemed a tad under-rehearsed on opening night, one of the best things about this production was the accuracy of the period details and the use of music during the scene changes to mark the passage of time.  In 1948,  the audience was greeted with swing music and crooners in the first scene; in the sixties  with speeches by President Kennedy and the Rev. Dr.  Martin Luther King.     In addition to a mink stole, white gloves and a hat ,  Miss Daisy even wore seamed stockings, popular until about 1960.

The best lines were given to the chauffeur because they were written in the old-fashioned southern African American country dialect, which in and of itself is extremely expressive and poetic.  As Hoke, Ekello Harrid Jr. handled the dialect very well, since  he is endowed with a  rich deep bass voice.  And he is extremely handsome!!!   He  managed to get a every drop of humor out of his lines and conveyed the complexity of racial relations and  self-esteem issues poignantly.

However, the other two actors could not manage Southern accents, indeed, most of the time Walayn Sharples, as Miss Daisy, sounded rather Irish, with an occasional elongated Southern diphthong.  Gordon Hendrickson, could handle the accent better, but both these actors couldn’t express their characters very well.   The pacing was slow, but that may have just been opening night.

The “play” was written very like a screenplay, with lots of little scenes in different places-the car, Miss Daisy’s living room, and the office where the son works.  Although the director used excellent sound effects to cover the scene changes, there were too many and were too distracting.  The material and its presentation are more suited to a movie, so the production suffered.