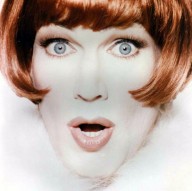 Seattle’s very own gay darling and media celebrity, Dan Savage, has taken time off from his busy schedule as editor, columnist, and gay rights activist to venture back into the world of theatre and bring us a new play about a deaf, blind, and mute drag queen named Hellen Stellar (played by Jonathan Pyburn).

The show, which is a campy adaptation of “The Miracle Worker,” is set in a drag club à la  “La Cage aux Folles,” and is a part of the summer festival of plays now underway at the Intiman.

Scantily clad bartenders, stiff drinks, and enough sequined dresses and feather boas to fully stock a Frederick’s of Hollywood lingerie shop help to set the ambiance at the fictitious 1990s Seattle gay night club called “The Brass Connection” (aka “The Ass Infection”), where the feral Hellen awkwardly performs her drag routine on a nightly basis.

She is joined on stage by other fierce and ferocious She-men including “Crystal Pain” (Burton Curtis), “Gloria Blaize” (Timothy McCuen Piggee), “Sissy Jizmor” (Michael Place), and “Bailey Legal” (Drew Highlands), who serve up a “fantabulous” evening of all your favorite, “tried and true” drag numbers by the likes of Gloria Gaynor, Donna Summer, and The Supremes.

But everything isn’t coming up roses for poor Hellen, who has become accustomed to doing as she pleases in the backstage dressing room that she shares with her flamboyant co-stars. She has no structure, no education, no personal boundaries, and no connection to the world in which she lives. In short, she is a hot mess who clumsily and mechanically treads out on stage every evening donning a strange combination of apparel composed of other people’s lipstick, a dress, a pair of pants, high heals, a wig, and an electric dog collar that shocks her if she ventures too far toward the edge of the stage.

All in all, it sounds like a gay old time to be had at the Intiman, which it is and isn’t. There are some great ideas in Savage’s new play, some funny moments, and some great acting on the part of the cast, but the show is hampered by a first act that is as clumsy and awkward as its main character.

In true Savage style, the play is replete with irreverent, politically incorrect, and downright nasty, vulgar humor, — which is NOT the problem. It is more so that the first act quite literally “drags” in many spots with banal dialogue, stereotypical characters, and predictable scenarios. There are a few funny moments, especially when Hellen is released from her dog collar and falls face forward off the stage, but I found myself at the end of the first act thinking: “No no no no no no no! This isn’t good!”

Luckily, the second act is a bit more redeeming. The setting changes briefly to a lesbian bar where Hellen will spend three weeks under the tutelage of her dyke teacher, Annie. In time, she learns to mimic and do tricks, much like a well-trained dog, but still fails to establish any meaningful relationship with the outside world, a relationship that only the development of language could give her.

In time, of course, Helen has a breakthrough, thanks to the healing power of vodka, and finally learns to connect to the music from which she had heretofore been estranged.

So again, on the surface, it seems that “Miracle” has all the right ingredients to be a very fun show; it’s got drag queens, tasteless Helen Keller jokes, lesbians, and some surprising uses for the legs of a stool. Unfortunately, it fails to deliver that knock out punch that distinguishes great comedy from mediocre comedy. Instead, it falls victim to stereotyped and predictable humor that is more focused on shock and juvenile irreverence rather than insightful and surprising humor that raises the comedic bar.

This said, it is still worth checking out, even if you do have to wait for the second act for things to get a bit more interesting.