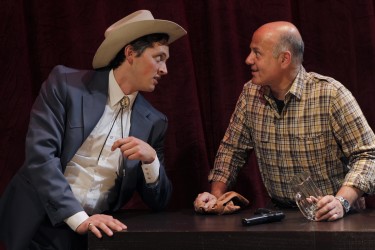 LOVE IS A BATTLEFIELD

You know you are in for a particularly interesting evening in the theatre, when a large lighted sign above the stage declares “FICTION”.  Isn’t theatre, by its very nature, fictional?  Why the giant sign?  It is, of course, the first clue that all is not what it seems in the Intiman Theatre’s daring, though at times inconsistent, production of John Patrick Shanley’s 2003 play, Dirty Story (through August 25th).

Shanley’s play begins almost too familiarly.  A man and a woman meet in a park.  Brutus (Shawn Law), a formerly well-respected writer, has not produced anything of note in a decade. Wanda (Carol Roscoe), a smitten graduate student, has asked him to comment on her first book manuscript.  Brutus behaves abominably.  Wanda laps up his abuse.  Brutus rebukes her for meekly accepting his excoriation.  “This is how you deal with a destructive critic?” he asks.  She tosses her manuscript in the garbage.  Then retrieves it.  Then tosses it in again.  The two intellectuals bandy back and forth, each trying to prove his or her brain larger and soul more tortured.  Though the setting and dialogue suggest realism, as it continues, the back and forth of their conversation begins to strain credulity.  Why does Brutus speak with a woman whom he clearly despises?  Why does Wanda continue to listen to a man who offers her such vitriol in recompense?  It becomes increasingly clear that something more is at work than a simple battle-of-the-sexes play.  When Brutus invites Wanda to his loft for wine and a seriously disturbing bout of sadomasochism, their relationship acquires an unexpectedly political dimension.Advertising Car Wash Air Dancer used

At this point, I feel honor-bound as a critic to proffer a warning.  If you would prefer to experience Dirty Story as I did, in complete ignorance (in my opinion, the only way to see it), then stop reading this review right now and go see the play.  Come back, and we can talk.  Is everyone who has not already seen the play gone?  Okay.  Good.  We can continue.

Those of you who have seen the Intiman’s production, or who are familiar with Shanley’s play, will know that at the conclusion of the first act, Dirty Story undergoes a dramatic shift in which everything that we have previously seen and understood about the play and its characters is revealed to be, as the giant lighted sign foretold, a fiction.  Rather than realistic characters, Brutus and Wanda are allegorical figures, representing opposite sides in the Palestinian/Israeli conflict.  Frank (Quinn Franzen), a portly cowboy with a thick Texas accent (do we see where this is going?) frees Wanda from her aforementioned bondage.  Wanda points a gun at Brutus and parodies Moby Dick, crying “Call me Israel.”

Whereas the first act is bewilderingly unmoored in time, the second act cannot avoid displaying the play’s 2003 date stamp.  Frank is a dead ringer for George W. Bush.  His compatriot is a self-effacing British fellow named Lawrence (Allen Fitzpatrick) who stands-in for former Prime Minister Tony Blair.  Wanda-as-Israel solicits their help in resolving the “domestic dispute” between herself and Brutus-as-Palestine.  Scenic Designer Jennifer Zeyl’s set effortlessly transforms from an artsy loft space into a contested battleground.  Potted palm trees colonize the stage like Jewish settlers in the Gaza Strip.

Once the great twist is revealed and the actors move into complete allegory mode, the political specificity of the allegory contributes to a general dated feeling.  Yes, the Palestinian/Israeli conflict remains a prescient issue, one that continues to define much of the realpolitik of global affairs.  And yes the overarching issues of trust, intimacy, suspicion, and interconnectedness between peoples still resonate.  However, the particular moment depicted in Dirty Story—Bush and Blair urging peace even as they fueled more guns into Israel and branded Palestinians as terrorists—has passed.  The Intiman’s production suffers due to the intervening nine years.

We look for Brutus, Wanda, Frank, and Lawrence to remain complex individual characters addressing an equally complex, evolving situation.  Yet Shanley’s allegory has the opposite effect.  It flattens the characters and simplifies their circumstances.  This is all well and good for 2003, when Bush and Blair appeared to the world as cartoons of themselves.  In 2012, the challenge of staging this play is how to make it speak to the current, Arab-Spring-into-Arab-Autumn situation along the contested Palestinian/Israeli border.  In this respect, Director Valerie Curtis-Newton’s production falters.  A series of broad-as-broad-can-be performances from her actors do not help matters.  There is plenty of material here to entertain, offend, and provoke people on all sides of the central conflict, especially those who enjoy being completely flummoxed by the first act of a play.  Nonetheless, all of it feels a decade out of date.  Across the courtyard and running concurrently, the Intiman’s production of Henrik Ibsen’s 1890 play Hedda Gabler is fresh and contemporary.