“ATTACK OF THE KILLER MURDER OF …DEATH!” 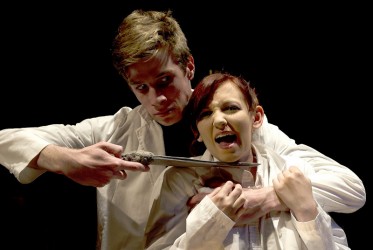 Yes, But who made that knife?

Seattle Public Theatre (SPT) and its community of family and friends, is bristling with pride at the work of their senior youth ensemble, and with good reason.  This group of talented young people has been working in the youth theatre project for most of their school age years, some starting at the age of eight.  Now, on the stage of the Bathhouse in Wayne Rawley’s side-splitting new comedy, their training and experience is shining through as they strut their stuff through an hilarious whodunnit.   These senior kids are stars, and their culminating show proves that SPT is running one of the best youth theatre programs around.

Fashioned in the style of a 1950’s B-horror movie that has mated with a screwball comedy from the 1930’s, “Attack of the Killer Murder…of Death!!” was written by Rawley especially for the graduating youth ensemble.  The play opens in the middle of an archly-played detective scene, but it is only moments before we hear the word “CUT!!” and realize we are watching the making of a very tacky movie.  We are told (in the most hilarious and efficient delivery of exposition in any comedy I’ve ever seen) the players are isolated on a island, one (conveniently) served by only one boat a day, and that the “Atomic Island of Doom” must finish shooting in one day or risk going over budget.  Murder is around the corner, and our screwball B-movie adds Agatha Christie to its gene pool.  The antics are underway.

I am not going to tell the reader anything more about the plot.  The twists and turns are just too funny to deny you any of the surprises that had me doubled over with laughter for most of the evening.  Suffice it to say that the props designer for this movie doesn’t quite have all his marbles, and that the weapons he has cleverly (or so he thinks) created don’t function as they should.  And therein lies the inciting action of the play.

It’s hard to believe the brilliant performers are all teenagers.  The snap crackle and pop of Maddie Gordon’s character Kitty Curvey not only wins the playwright a prize for the best character name, but also shows off Ms. Gordon’s dexterity in subtle comic play rendered at 200 miles per hour.  Not since Rosalind Russell in Girl Friday, or Ginger Rogers in Roxy Hart has a gal talked so fast, been so funny, and yet so grounded that she is barely moving while owning the stage.  William Lavely, as her counterpart Martin Van Handsome (second best name) is over-the-top funny as the vacuous but beautiful leading man.  Remember Ted the newscaster from the second version of the Mary Tyler Moore show?  That’s Martin, with an even lower IQ.  The marvelous Aviva Wynn shines as Desdemona Sunset, and must employ both a Russian accent and a ghostly presence in the delivery of her sexy role.

Props Man Gus Cassidy, played wonderfully by Peter Durning, is one of the weirder guys on the movie team. Durning and Rawley did their homework here, as props designers for the movies often are the smartest inventors in the room, but clueless socially.  Gus fits the bill.  His sidekick is the ever-eager Abby Watson (the delightful Hannah Rose), who, like her namesake that followed Sherlock around, is determined to solve the crimes.

The ensemble is completed with Joe Ptasnik as Benjamin by-the-book Booke, the suspicious detective, Erica Thomas as Samantha “Sam” Silver, the moneyed producer, Sarah Murphy as Rosie Robbins, the go-to script girl, Francesco D’Aniello as Beauregard Andrews the cameraman with a big secret, Jake Larson as Archie Loman, the nerdy have-typewriter-will-travel screenwriter, and Ben McCarthy as Sydney Candle, the director who can’t get a break.

Rawley’s play is smart, funny, and nods reverentially to nearly every cliché one can imagine from the world of B-movies.  He embraces some classic films as well, as I find one of his final scenes reminiscent of the final confrontation between Bette Davis and Anne Baxter in All About Eve.  The classic films of the 30’s and 40’s provide great study in dialogue for playwrights, as the patter in the great ones are fast, furious, smart, and always character-driven.  Rawley has a great ear, and a lot of respect for his audience and players.  He would do well to sharpen his editing of the second and third act as he relies too much on long explanatory monologues to resolve his many plot-lines.  The first act plays like gangbusters, and is staged sharply by Shana Bestock.  But the second and third act suffer from less rehearsal and over-writing.  The staging became static yet the actors did a great job maintaining their focus and energy.  I hope Rawley does his work to make it leaner, meaner and funnier, and that the play can go on to have a life of its own.

If you have teenagers, love teenagers, or once were a teenager, nothing should stop you from going out to the Bathhouse and enjoying this free summer show.  SPT’s Artistic and Eduction Director Shana Bestock announced that the much beloved building is getting a new roof and a new air conditioning system.  Wonderful!  And the new seats made the audience happy.  Thanks to SPT for nurturing the next generation of theatre artists and cultivating such a loving community of supporters.  What a fabulous evening of entertainment.

Attack of the Killer Murder….of Death!!  A world premiere by Wayne Rawley, directed by Shana Bestock and performed by the Senior Youth Ensemble of the Seattle Public Theatre.  Remaining performances July 7th @ 7p.m., July 8th @ 2pm, July 13th @ 7pm and two shows on July 14th @ 2pm and 7 pm.  All performances are free and open to all.  Call 424-1300 for more info.  www.seattlepublictheater.org