ACCIDENTAL DEATH OF AN ANARCHIST 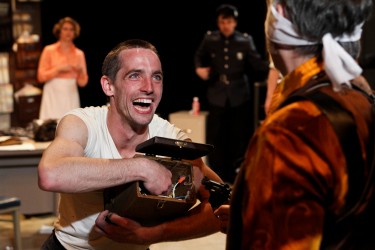 “Accidental Death of an Anarchist” makes a splash and is a blast!

Dario Fo’s contemporary-classic dark farce, “Accidental Death of an Anarchist,” is based loosely on a real event that took place in Italy in 1969 involving an anarchist named Giuseppe Pinelli who had been accused of a bank bombing that left 17 people dead and more than 100 wounded. Following a 4-day interrogation by the Milan police, Pinelli either fell, – or was thrown, – from the 4th floor window of the police station. A judge ruled the incident “an accident,” – thus the show’s title.

To make a long story short, it was eventually revealed that the bombing was, in fact, the work of right-wing fascists from the Italian Social Movement. At the time of the 1969 event, members of the ISM had published leaflets accusing socialists, communists, and anarchists of orchestrating the attack, – a move which ultimately led the police to make a number of arrests, – including the arrest of Pinelli. Shock and outrage followed once the truth had finally been uncovered and the scandal exposed.

The beauty of Fo’s play is that it is a perfect blend of traditional Italian Commedia style fused with modern European theatrical aesthetics. It incorporates physical comedy, slapstick, improvisation, and quasi-stock characters combined with contemporary techniques of self-conscious staging, “engaged” dramaturgy, and complete with characters lacking in “essence,” (in the psychoanalytic and existential sense of the word).

It is a play that truly embraces the “death of the author” as proposed by Barthes just a few years earlier in 1967. In superb deconstructionist fashion, it heralds the autonomy of the art of mise-en-scène by simultaneously embracing and breaking with tradition. It does this by inviting companies to “update” the script in certain places, to make it their own, to modify the text so that it can resonate with different audiences in different settings in different times. It even goes so far as to offer two opposing endings between which the audience may choose – thus a dramaturgy of engagement, where the audience are not passive consumers but rather co-collaborators in the collective construction of “meaning” and “truth,” – a major trend in contemporary Continental drama.

Luckily, director Gabriel Baron did not shy away from the freedom astutely given to him by Fo. (I noticed in the program that Baron had studied with Lecoq School co-founder, Pierre Byland, which most likely explains his willingness to “stray from the text,” to not preoccupy himself with misguided and unattainable notions of “fidelity to the text,” or of attempting to ascertain and respect a so-called “author’s intention” – something which most American directors fear to do, and even vehemently oppose).

Instead, Baron asserts his freedom as a director and offers up stylized blocking, localized references, and topical insertions of contemporary material (including music and politics) that diverge from the original script and ultimately serve to make this production of Fo’s play Baron’s own. Bravo! Finally a director in Seattle whose work is critically informed!

Strawberry Theatre Workshop’s production of the show keeps the focus where the focus should be: on the playful re-enactment of events leading up to Pinelli’s death. Greg Carter’s scenic design is balanced, functional and unimposing. He successfully captures the feel of a late 1960s Italian police station with a simple set composed primarily of stacks of filing cabinets, a small oscillating fan, a bright lamp light that hangs overhead above the desk of the investigating officer, and of course, the infamous window through which Pinelli came to die.

The effectiveness of the unobtrusive set is further enhanced by a wonderful lighting design by Reed Nakayama and a playful sound design by Evan Mosher.

But of course, the real gem of the show is the actors, in particular, Ryan Higgins, who is splendid in his lead role as “The Maniac.” Higgins demonstrates a remarkable aptitude for physical comedy that is reminiscent of that of Jim Carrey. I was glad to see Higgins once again taking on a substantive role as he did in Theatre Schmeater’s excellent show from last year, “Live from the Last Night of My Life!”.

Indeed, all of the actors (and actress!) do a great job and handle the physical demands of the fast-paced, slapstick comedy with finesse. And thankfully, they were smart enough to avoid using Italian accents! Kudos to the entire cast, which includes, in addition to Higgins, Jason Harber, Tim Hyland, Galen Joseph Osier, MJ Sieber, and Rhonda J. Soikowski.

One surprising thing that happened during the performance, however, was that they did not receive a standing ovation. This was surprising because Seattle audiences are known to be especially generous with their ovations. Quite bluntly, to modify the lyrics of an old “Dead Milkmen” song: “They’ll [stand] for anything.”

So, I was shocked when, the one time that a show truly did deserve a standing ovation, it didn’t happen; but I stood and applauded with great enthusiasm, (which is very rare for me), and I hope that Strawshop will continue to do such good work and choose plays with grit and substance! Hats off to the entire company!

“Accidental Death of an Anarchist” is now showing at the Erickson Theatre Off Broadway from July 5 – August 4. It is produced by Strawberry Theatre Workshop. www.strawshop.org. Phone: 206-427-5207.