Standing Ovation for I Am Not Your Perfect Mexican Daughter

Juliette Carrilo’s I Am Not Your Perfect Daughter will make you laugh for two hours while also reaching deep into your heartstrings with its honest representation of grief, generational trauma, social inequalities, familial expectations and the struggles of undocumented and 1st generation immigrants in the United States. Based on Erika Sánchez’s novel, Seattle Rep’s latest production – which is also the West Coast premiere of the play – centers around Júlia, a 15-year-old Mexican American grappling with the death of her older sister, her parent’s expectations, her dreams of becoming a famous writer and her own coming of age. 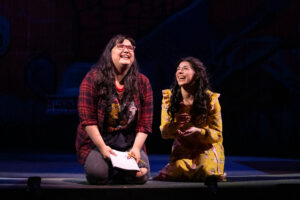 Júlia is loud, messy, funny, outspoken, firm in her beliefs, and incredibly blunt. She also feels everything very intensely and is quick to express herself, which often results in fights with her mom. Nothing like Olga, her sister and their mom’s favorite, the “perfect Mexican daughter”, who “cooked, cleaned and never stayed out late”. Like many children of immigrants, Júlia is responsible for making sure her parents’ hard work and sacrifices don’t go to waste and, without Olga, she has to do that all by herself, all while dealing with both hers’ and her parents’ grief.

Karen Rodriguez’s performance as Júlia is absolutely hilarious and heartbreaking. She navigates her character’s complex emotions flawlessly, going from statements like “I haven’t taken a crap in four days”, to “She looked at me like a mutant who slithered out of her body.” Her mastery of humor is impeccable, present in her narrative, her tone of voice, gestures, and her characteristic contagious laugh. In contrast, she poignantly delivers powerful moments of anger, heartbreak and depression that are especially impactful in between the humor. Still, I do wish we would’ve had more time with the sad moments instead of going back so fast to the funny ones. That way, it would be easier to appreciate the depth of Júlia’s character a bit more and to advocate more efficiently for mental health.

After Júlia experiences a particularly bad depressive episode that lands her in the hospital, and although there are actions taken to help her get better, no one verbally acknowledges what happened. In this instance, it feels as though the darker parts of her mental health are shrugged off simply by not talking about it. These topics are not often talked about in the Latinx community and are dealt with very privately, so this might be considered accurate. However, it seems to go against the healing message that is so well depicted throughout the rest of the production. It would’ve been nice to see Júlia talking about and processing her stay in the hospital after she was feeling better, if not with her parents then with her friends who no doubt noticed her absence.

The rest of the cast is comprised of Sofía Raquel Sánchez, Jasmín Corona, Eddie Martinez, Marco Antonio Tzunux, Aaron Blakely, Michael Monicatti and Leslie Sophia Pérez. All of whom excel in their performances, bringing each of their characters to life in a realistic and human portrayal. Their energies combine harmoniously to create Júlia’s grief-stricken family, her bubbly and opinionated friends and her gently caring white boyfriend. Unlike other narratives, we also get the opportunity to learn about some of these characters’ own struggles and about their versions of grief and trauma. It results in a refreshing and well-rounded exploration of human suffering instead of giving us a single character’s perspective.

To pull all of it together, the lighting, sound and scenic teams bring to life an abundance of colors and Mexican elements that set the tone and brighten the whole experience. There’s even a dance sequence choreographed by playwright Isaac Gómez that uses Reggeaton and typical Mexican quinceañera music.

Most notably, scenic designer Efren Delgadillo Jr. set to represent “Júlia’s imagination, memories, culture, and spirit of Chicago” in the shape of a colorful bamboo curtain mural that covers the length of the stage and that matches the props. Then Ruth Gilmore, charge scenic artist brought it to life for the Seattle Rep stage. Street artist and muralist Joseph Perez, also known as Sentrock, originally created the mural in Chicago and was later recruited for the Seattle production of I Am Not Your Perfect Mexican Daughter. The finished piece is one of the best minimalist stage setups I’ve seen. It envelops the scene with personality and vibrancy and allows the actors to come in and out anywhere on the stage. It’s also see-through in a certain light, which creates the perfect effect for dream sequences and fantastical moments. Additionally, the stage moves in circles to emphasize characters, maintain movement and allow better interaction between the stage, actors and audience.

Definitely recommend this production for teenagers, parents and grandparents alike, immigrant or nonimmigrant, Latinx or not. For those struggling with identity and pain, and for those trying to be better and more understanding human beings. A snarky, touching, and visually and emotionally striking performance. Culturally and LGBTQ+ inclusive. The night I watched the play, it received a standing ovation, and I think it will earn one every time.

*Check out the trigger warnings on Seattle Rep’s website as there are explicit mentions of mental health, sh, sa, pregnancy, national-border related violence and others.

Open Captioning is available in Spanish or English for certain performances. 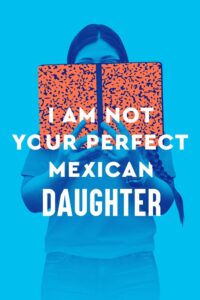