PoBoyTango, by Kenneth Lin, opened this weekend at Tacoma Little Theatre. Although it had interesting subject matter, a talented experienced director, David Hsieh, an equally talented and passionate actress, Michelle Blackmon and set, sound, and special effects worthy of Hollywood, the script was not of the same caliber, so it was disappointing.

The exposition took up the whole of the first act, and telegraphed the audience with excessive details, very little dramatic conflict and sit-com type superficial gags, which fell flat. Michelle Blackmon’s passionate acting saved the second act but I wondered if a lot of people left after the first act. 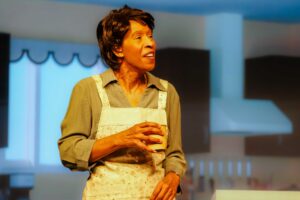 Essentially, two former very close family friends get together one evening during a thunderstorm. Richie Po, played by Sam Lai, the über-hardworking Chinese immigrant father of grown children, and Gloria B, an African-American hospice nursing assistant, who had nursed Richie’s young daughter, who was her son’s playmate, ten years ago. The encounter is awkward since there has been no contact since. 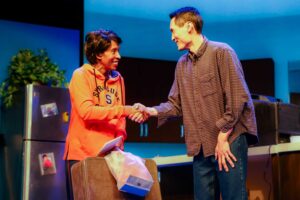 Richie Po, who graduated first in his class from a university in Taiwan, and is the son of a famous Taiwanese TV chef, has always worked two and three menial jobs in New York City to provide for his family, which sounded not quite plausible. Gloria, has managed to push her son into a basketball scholarship upstate, but can’t quite cut the apron strings. 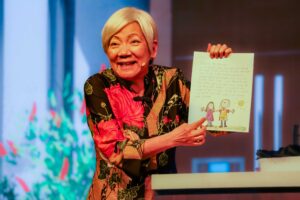 Using the unwritten recipes of Richie’s mother, and Gloria’s cooking ability, the two decide to go into business. But it is not until the second act that the real conflict between the two, is revealed. Things are resolved clumsily.

A huge amount of credit goes to Technical Director Blake R. York, even with a lot of scene changes; scenes in three different kitchens,a scene on a street in Chinatown, NYC and outside in a Park, the technical scene changes were swift and efficient . Burton K Yuen’s sets were strikingly beautiful and the special effects were magnificent and effective.

It was a solid production, but with all that talent, they needed a better script. Kenneth Lin may be an established playwright, but I would recommend a re-write.