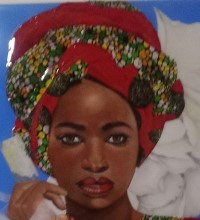 Many of us know that most theatres, such as Steppenwolfe, started out modestly in church basements, but not many of us know that Art Galleries start out in houses on preserved blocks in the Central District in Seattle. “Situated in a fifth-generation Black-owned home, Wa Na Wari is an immersive community art project that reclaims Black cultural space and makes a statement about the importance of Black land ownership in gentrified communities.” The Martin Luther King Day weekend Art opening reception presenting the works of Kriston Banfield, Bonnie Hopper, Sable Elyse Smith and Amanda Howell Whitehurt was a powerful mechanism to keep leggoland development at bay in the Central District. 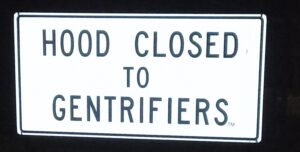 Personally, I was delighted that Wa Na Wari, was in a house with all the original old woodwork in a block which still had trees and no modern development! On the first floor was Bonnie Hopper’s “portraits” filling the room with vibrant colors. Working from photographs, she painted portraits, then added collages, reflecting the characters of the people. Over this she put a resin which made the portraits positively shimmer, like ice on a sunny day. 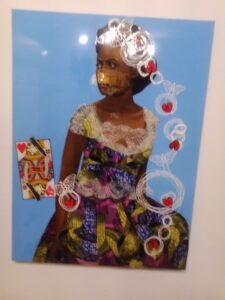 On a cloudy rainy January day in Seattle, it was not only intriguing but also extremely enjoyable. Her ability to capture a person’s intensity by the way she painted the eyes was quite fascinating. One’s attention was immediately caught by the eyes in every single portrait to such a degree that one felt compelled to peruse all the details. 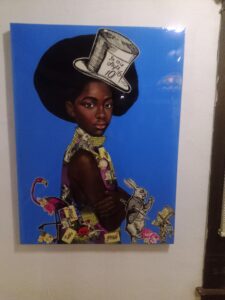 Amanda Howell Whitehurst’s exhibit contained some highly interesting large scale cartoon characters depicting “who I am, or who I may want to be Confident, beautiful, earthy and strong.” Each portrait exudes this confidence but also reveals certain quirky creativity on the part of the artist. 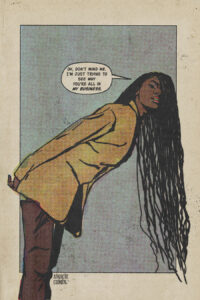 Kriston Banfield is a self-taught artist from Trinidad and Tobago in the Caribbean, currently based in New York City. His work is “strongly inspired by Trinidad and Tobago’s affinity for narration and much of its cultural histories being based in West African storytelling, utilizing new interpretations of myth and elements of religion and spirituality.” 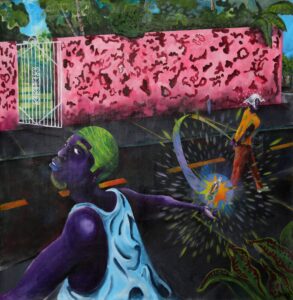 It was a charming relaxed evening and the techniques and styles of Hopper and Whitehurst were technically interesting. I recommend stopping in on the exhibit which runs through April 16, 2023.