Gaslight-Angel Street A Thriller with a Feminist Message

Gaslighting :psychological manipulation of a person usually over an extended period of time that causes the victim to question the validity of their own thoughts, perception of reality, or memories and typically leads to confusion, loss of confidence and self-esteem, uncertainty of one’s emotional or mental health

Although the term “gaslighting” only came into use in the 1960’s, it originally derived from the British psychological thriller, Gaslight by Patrick Hamilton, first performed in 1938 in London, on the brink of the outbreak of World War II, when two nasty dictators, Hitler and Stalin were gaslighting the populations of their respective countries. Seattle’s esteemed theater; Sound Theatre Company has opened a production of Gaslight, directed by the equally esteemed Theresa Thurman at 12th Ave Arts.

The date when the play is set, according to most sources was 1880, a highly significant date as it was two years before the passage of the 1882 Married Women’s Property Act, which gave married women the right to control property and any wealth they may have acquired through work or inheritance during a marriage. (e.g. the proceeds from a married authoress’ copyright would be controlled and owned by her husband, prior to this law) Also if a wife was divorced against her will, her dowry would more than likely be kept by her husband.

Gaslight or Angel Street as it was originally called in the US, has been very successful on stage and on film. In 1940, after its success in the West End of London, it was made into a film in Britain, in 1944 legendary director George Cukor directed Ingrid Bergman and Charles Boyer in a multi-award winning film.

On the one hand, the play is a plot driven thriller, on the other hand, the given circumstances reveal a feminist undertone. In addition, the author depicted, with astute psychological accuracy, the profile of a manipulative control-freak and demonstrated the mechanisms used to undermine their victims’ sense of reality. Using a kindly detective and some sympathetic servants, the author, constructed the play with a huge amount of suspense, to reveal that the husband was not just the run of the mill Victorian patriarch but a much more dangerous individual with a sinister past

As the play opens the toxic psychological dynamics between the married couple, Bella and Jack Manningham are revealed efficiently by the author in succinct dialogue. Like so many other pandemic quarantine observers, who has been watching too many streamed productions and too much TV at home, my first instinct was to hiss and howl about what a totally manipulative abusive MCP (male chauvinistic pig) the husband was. 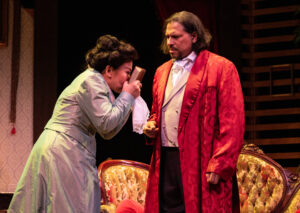 Played by Kathy Hsieh, Bella, the wife, was behaving like a three or four year old trying to please her stern Daddy after she had been “misbehaving.” The husband, played by Johnny Patchmatla, a tall, large man with a deep authoritarian voice, was the epitome of a Victorian Pater Familias, except that she was the wife, not his child.

Although she initially tries to defend herself from his accusations, she evolved into a volunteer for victimhood, and switches gear swiftly to do anything to gain his approval, and a few small crumbs of affection. He, in turn, is successful in convincing her that she may well be going mad, like her mother, by forcefully denying her sense of reality. Subsequently he threatens to put her in an insane asylum, unless she conforms to his version of reality.

Conveniently for him, the house, where they live, was bought with money she inherited after they were married, so he could have absconded with the money from the sale of the house, if he had been able to get her certified as insane.

Overall it was a well directed play, with a more or less solid cast; however, some of the actors had trouble with the accent and diction. Kathy Hsieh, in particular, although a strong actor, had trouble with the accent which impeded her connection with the character. Like many American actors she did not bother to acquire British intonation, nor vocal placement, so her speech just sounded labored. The actor playing the Inspector, Hisam Gouli, who otherwise delivered a strong performance, mumbled about 10 % of his lines, which caused some misunderstanding, in a very plot driven play. 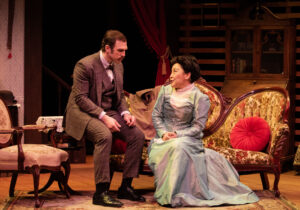 Technically, the production was excellent, the set and props by Robin Macartney were pure Victoriana, the sound designed by Erin Bednarz, who also composed the music, added a lot of suspense and and emotion. The complicated lighting by Richard Schaeffer was spot-on and served the production well.

I recommend this production to everyone, as it is such a good portrait of the kind of people we all need to avoid: people who manipulate us through denial, shamming, and control; they are everywhere and not all of them are serial killers. This production was also riveting with suspense.

Free parking is virtually impossible. Walkable from Sound Transit, or the #10 Bus.