Village Theatre is back with Jason Robert Brown’s Songs for a New World!

There could be no more fitting return to the stage for Village Theatre than Jason Robert Brown’s ode to defining moments and turning points, Songs for a New World. When theaters all went dark in March of 2020, the world had no idea when, if, or how it would return. In the intervening almost two years, the theater community had to reckon with their failures towards its most marginalized and vulnerable members as well as the accountability of those with the most power. As Woman 2 sings in the opening number, “the surface sometimes cracks to reveal the tracks to a new world.” 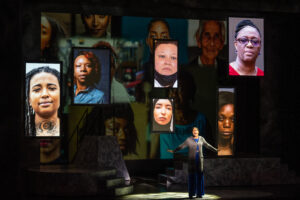 To categorize Songs for a New World is no easy task. It is not a musical, and not a cabaret. Rather, Songs for a New World is most often designated as a song cycle. It is a collection of songs that are not tied together by plot but rather a unifying theme of change. Brown himself says, “It’s about one moment. It’s about hitting the wall and having to make a choice, or take a stand, or turn around and go back.”

The entire cast is composed of four people: Woman 1, Woman 2, Man 1, and Man 2. With the vague and ambiguous names, the performers are able to change characters with each musical number – jumping deftly from basketball star to prisoner to soldier, just to name a few. The audience is able to explore the complex themes of, as stated in the program, “life, love, and the choices that we make” from every angle and lens. 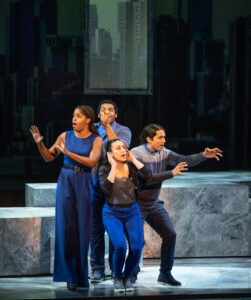 While many, maybe most, productions of Songs for a New World are set as an abstract song cycle, Director and Choreographer Devanand Janki has chosen to present 15 compact but fully staged musicals. Each number is completely and perfectly realized. There is none of the ambiguity or sparseness which is normally a staple of this piece. Although this does not leave any room for the audience to interpret the songs as they choose, it only serves to make the characters richer and clearer and their stories more impactful. Thanks to the ingenious staging and the help of Lighting Designer Amiya Brown and Projection Designer Caite Hevner, there was a kinetic energy throughout the performance that counteracted any possible lag that might come from having to change locations and characters with every song. 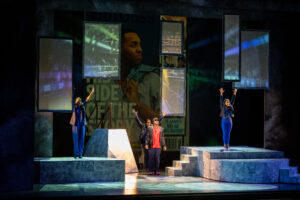 Janki (with additional Casting support from Katheryn Van Meter) has assembled a truly outstanding cast that not only absolutely crushes Brown’s notoriously challenging score but brings pathos, passion, and spirit to the stage with some simply beautiful storytelling. Cal Mitchell as Man 1 has an agile and effortless tenor voice infused with just the right amount of R&B and Soul. Each riff and run is used to great effect. Whether pleading in “On the Deck of a Spanish Sailing Ship”, showing off his bravado in “The Steam Train”, or illuminating the desperation of “King of the World”, Mitchell is never flashy for flash’s sake but rather uses the staples of the genre to add further insight into his characters. Not only does he conquer the demanding range required of Man 1, Mitchell remains absolutely present in the moment as if he is discovering each line of music as he sings it. In the role of Man 2, Tyler Dobies has a rich and resonant sound. Where Dobies really shines is in his ability to show a character’s entire arc within the confines of one song. He conveys a surprising vulnerability to his songs – particularly “She Cries” and “The World Was Dancing” and his voice is always in service of the story. 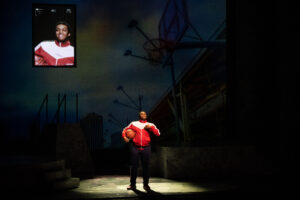 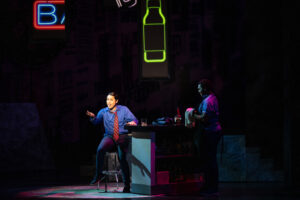 Maria Habeeb as Woman 1 has a warm, clear and dynamic soprano voice. She is able to bring a depth and complexity to each turn onstage while always remaining open and authentic. As she protests in “I’m Not Afraid of Anything” her layered performance betrays a deeper conflict and Habeeb infuses a sweet sense of hope and promise in the tender ballad “Christmas Lullaby”. Rounding out a cast of superstars is the returning champ to the Village stage, Alexandria J. Henderson as Woman 2. She is the very definition of a powerhouse and she gets to use most of the tools in her very impressive arsenal. Henderson is able to move effortlessly and expertly from the hilarity in “Just One Step” to ripping out our collective hearts in “The Flagmaker”. Sometimes, she does it all on one song as in “Stars and the Moon”. 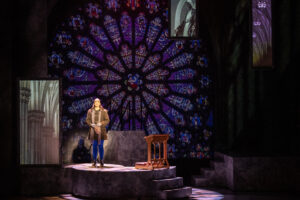 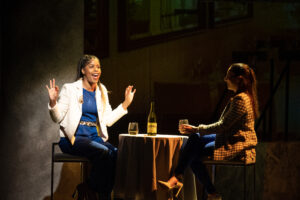 One of the challenges of mounting a musical with such a small cast and a fairly small orchestra is that the sound can seem sparse or anemic. However, under the skillful leadership of Music Director and Conductor Tim Symons, the cast and orchestra explode from the stage with an energy and robust sound that could rival any pre-pandemic, grandiose, cast of hundreds.

Though Songs for a New World is not a diverting musical romp that we might think that we want in these troubling times, it is the funny, sad, beautiful, devastating, and ultimately hopeful performance we need. The show ends with Man 1 singing “Listen to the song that I sing and, trust me, we’ll be fine” and, if only for those few seconds, we can all believe it, it is well worth it.

Songs for a New World will be in Issaquah at the Francis J Gaudette Theatre through February 13, 2022 and at the Everett Performing Arts Center February 18 – March 13, 2022. For tickets and more information, please visit www.villagetheatre.org.