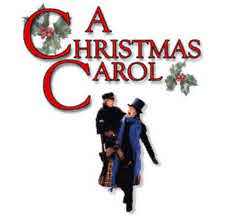 His Offenses carry their own Punishments.

From the very first scene, I knew that A Christmas Carol at Harlequin Productions was not going to be just another Christmas cash cow, but was going to be an amazingly interesting adaptation. My initial perception was confirmed! Director Aaron Lamb’s adaptation was indeed unique and elevated the story beyond just a Victorian morality play. Even if you have seen A Christmas Carol umpteen times, this production is well worth a drive down to Olympia.

A Christmas Carol, written in 1843 by Charles Dickens, was popularized by public readings, as illiteracy was still high. As we all know, Charles Dickens, an incredibly prolific early to mid-Victorian writer, who experienced firsthand the ill effects of the Industrial Revolution, wrote extensively as a novelist, journalist and short story writer. One constant theme was individual morality regardless of ideological persuasion. A Christmas Carol tells the story of a late-middle aged man, Ebeneezer Scrooge, who sold his soul to the great god mammon early in life, has Thatcherite principles, is loveless and uncaring to those around him. After undergoing a redemptive process, he manages to see the error of his ways, the damage he has done to others and especially to himself, finally he becomes more charitable and in doing so become happier.

Lamb demonstrated his skill by a deft opening; the actors narrated the first few pages of the novella. Essentially, it was an emphatic affirmation that Scrooge’s partner was indeed dead, and the entire cast, assembled on stage, spoke their lines somberly yet with incredible dramatic anticipation. It highlighted the horror/ghost theme, often downplayed, within the morality tale. As exposition goes, this was exceptionally effective and commandeered the audience’s attention like Napoleon before a battle.

Particularly awesome were the gruesome scenes when the ghosts appear, aided by creative technical aspects, which were frightening, even to adults. Throughout the show the scene design by Jeannie Beirne, the Lighting Design by Olivia Burlingame, the Projection Design by John Serembe, Properties Design by Gerald B. Browning and especially the Sound Design by Keith Jeweell and Gina Salerno cannot be commended enough. Period Costumes by Darren Mills were exceptional. Most impressive was the way that all the technical aspects enabled the numerous quick scene changes.

As Scrooge, Terry Edward Moore, was spot-on as a thoroughly unpleasant person, but the gravelly voice he chose as “Unpleasant Scrooge” at times sacrificed clarity. Although there was a huge amount of double, triple and quadruple casting, it all worked so well, I had trouble trying to work out which actor played which part!

My British companion said it was a pity about the accents; unfortunately I found that the children in the show were often unintelligible. However, that was minor. 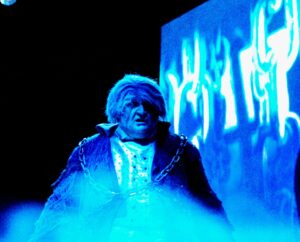 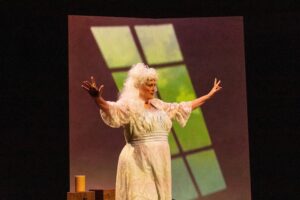 For the imaginative staging, the strong performances, and the music, I heartily recommend this show. Harlequin Theatre seems to be on a roll this season, having already had some outstanding shows.

It is worth the trip to Olympia, it has a very pleasant downtown, with beautiful old architecture, lots of restaurants and shops for Christmas shopping. I recommend the matinées as the traffic is not so bad, and parking is free on Sundays.

For all performances from December 26 – December 31, use code HP2FOR1 for a 50% discount at all price points!* 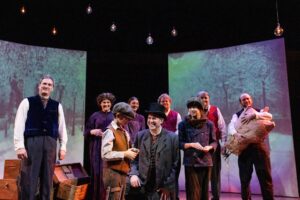