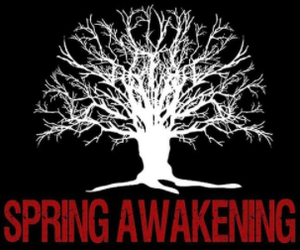 Spring Awakening, The winner of eight Tony Awards, including Best Musical, will be livestreamed until Nov. 7 by Capitol City Theatre Company. The landmark musical, with lyrics by Duncan Sheik and music by Steven Sater, is an electrifying fusion of morality, sexuality and rock and roll that has been exhilarating audiences across the nation like no other musical in years.

Spring Awakening (Frühlings Erwachen in German) was originally written in 1890-91 but not performed until 1906, when the famous avant garde director, Max Reinhardt, directed it at the Deutsches Theater in Berlin. As a result of its controversial subject matter: the devastating effects of adolescent sexual ignorance and repression, teen-age suicide, child abuse, and other taboo subjects in the early 20th Century, it was often banned and censored. It was also a harbinger of Expressionism and modernism in theater.

Wedekind was writing at a time when Freud was writing about psychoanalysis, infantile sexuality, the role of sexual repression in mental health, the interpretation of dreams and other taboo theories, which threatened the social order of 19th Century bourgeois society. Other visionaries such as Oscar Wilde and the French symbolist poets were undermining cultural norms as well.

Spring Awakening’s exposition is swift, a 14 school-girl Wendla, is trying on a short skirt, when her mother tells her that the “stork” has brought another baby for the older married sister, and then forbids Wendla from wearing a short skirt.

Well into puberty, Wendla begs her mother to tell her where babies come from, but the mother says they just come from loving one’s husband a lot, leaving Wendla extremely vulnerable for sexual exploitation.
The plot weaves a web around the theme of sexual repression and ignorance, as both boys and girls in the provincial town try to deal with sexuality, without any concrete knowledge of what is happening to them or their bodies. The adults around them are generally nasty, repressed, frightened and authoritarian. There is an unwanted pregnancy, a botched abortion, suicide, domestic violence, as well as parental and school abuse.

All performances take place at the Capitol City Theater Companies Studio Located at 1742 N 48th Street in Lincoln, Nebraska and Streamed Nationwide through a partnership with Music Theater International, but will be livestreamed.