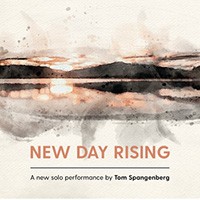 At 18th and Union, a New Day Rising is performing for three nights. It’s a new solo performance written and performed by Tom Spangenberg and directed by Carol Louise Thompson. The performance is inspired by the line “tell me about the dream where we pull the bodies out of the lake and dress them in warm clothes again.” By Richard Silken. Based off of this vivid line of poetry comes an evolving dystopian story. It explores the themes of trauma, acceptance of oneself, and finding redemption.

The story beings with the character of Silas, a goofy and hardworking individual. He warms up the audience with his humor, but the story quickly turns dramatic. Even throughout the dramatics, there is still that element of humor to help lighten up the show.

Spangenberg plays multiple different characters and gives each of them a life of their own. He has two female characters, and he doesn’t do a caricature of them, but instead makes them realistic human beings who happen to be women. The two male characters are goofy and a big ‘hick,’ but he makes us laugh with his mannerisms and interaction with the audience.

There is fantastic and creative worldbuilding within the story that Spangenberg presents. He gives details of the world not through a monologue, something that would ruin effective worldbuilding, but through little details said throughout the entire show.

The show runs about an hour in length. Tickets are $12 to $20. There’s one more opportunity to go see this thrilling show. Throughout all of the performances, Spangenberg is making adjustments to the story, so come and witness the evolution of New Day Rising.