‘A Chorus Line’ a Classic for Tacoma Little Theatre

For a show that hasn’t appeared on a South Sound stage in quite some time, “A Chorus Line” is a truly pedigreed piece of theatre. Ignoring the Michael Douglas movie vehicle (it deserves it), the stage musical is an unprecedented box office and critical hit. It received twelve Tony nominations, winning nine of the coveted theatre awards. It was also named the 1976 Pulitzer Prize for Drama. Tacoma Little Theatre continues its 101st season with a high-kicking, high-quality version of the original.

The South Sound is blessed to give creative outlet to some of the West Coast’s finest choreographers. While Drama in the Hood appreciates their work, both on and off the page, we don’t often lead with kudos for their work. That stops today! Eric Clausell takes both the Director’s and Choreographer’s bow for this show, and richly deserves every bouquet. While the Tacoma Little Theatre stage is in a stretched format for this show, it still isn’t big enough. Mr. Clausell makes it work anyway. Indeed, after initially thinking “Is this stage going to hold them?” before the curtain, that thought never again returned. Eric Clausell has a talented roster of dancers and he wrings every sweat droplet of talent out of them…5,6,7,8.

The curtain rises on a story of a hard-driving choreographer forming a show. Reminiscent, more than a few times, of Bob Fosse in both voice intonation and intensity, “Zach” puts his prize dancers through their paces with the skill of a master at the craft. Michael O’Hara plays Zach, and plays him beautifully. Zach is a humorless sort, and Mr. O’Hara depicts that in voiceover, but also in his limited time on stage leading his troops in the art of the dance. His facial expression is severe! His steps are perfect, but there is absolutely no joy to his dancing. It’s like watching a general show his troops how to march. Mr. O’Hara is one of the best parts of this show about dancing, and he barely dances. It is a great performance.

Over the course of the show we learn some backstories, and some tales of how these particular dancers come to want to be in the line. Roycen Daly’s “Paul” slowly breaks our hearts with his halting willingness to tell his story. An incident in the second act changes the arc of Paul’s career, as well as brings to mind the rest of the company how fragile is this thing called professional dance. Mr. Daly, these tissues are because of you.

Two performers stood out for their beautifully realized interpretation of their role. Whitney Shafer’s “Cassie” is overqualified for the line, and Zach makes no bones about it. But, after a career of one disappointment after another, Cassie wants to come home. Sure, it may be starting over, but it is starting over from a place of love for the language of the dance. Ms. Shafer’s extended dance solo is one of the parts of this show that is worth the price of admission. Drama in the Hood has no idea how long the solo lasts, but it does not last long enough! We could have watched her move gracefully across the stage for twice as long. 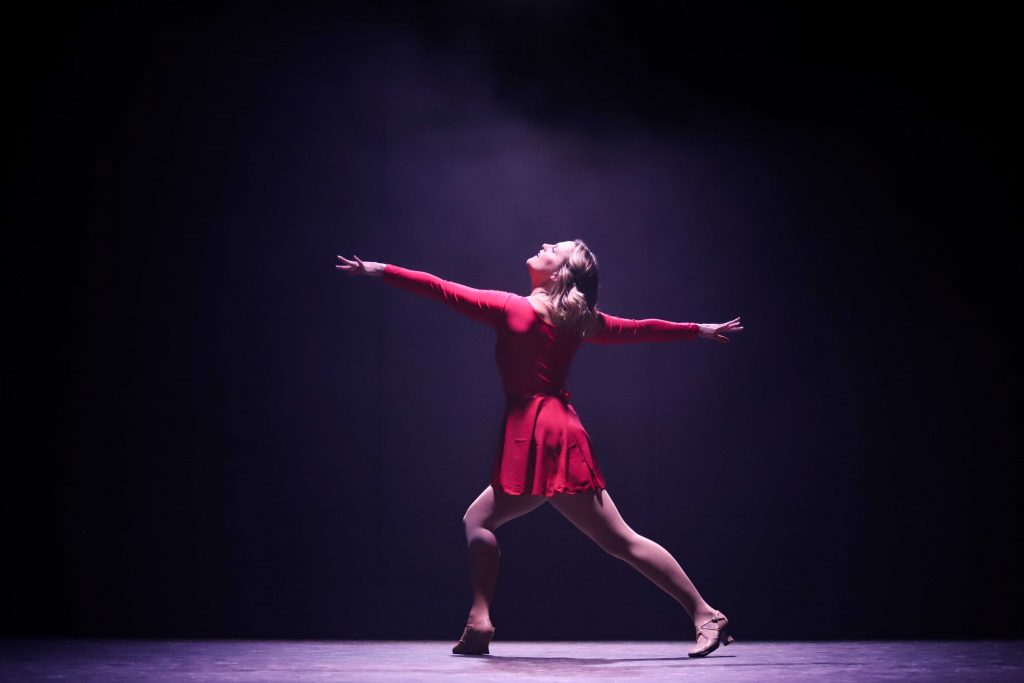 This show marks Whitney Shafer’s inaugural turn on the Tacoma Little Theatre stage. Even at the ripe old age of 101, this place learned a couple of things about grace from Whitney Shafer. She should come back, and soon!

“Worth the price of admission.” Drama in the Hood is careful with that expression, because we want to mean it when we say it. Indeed, ten or more shows can go by and we will never say those words. Now, here we are, saying them twice. Keola Holt’s star turn as “Diana” with the song, “What I Did For Love,” wrenched the whoops and whistles out of the crowd as she sailed high, higher, and highest without losing a bit of tonal integrity. Certainly, it isn’t just that she sang the notes, but that she made us believe the message behind the song, Just as she has no regrets about what she did for love, nor should she regret for a moment taking this stage and turning the crowd on its ear.

Along with Whitney Shafer, Ms. Holt marks her TLT debut in this performance. Ladies, where have you been and will you promise to come back?

Two smaller roles deserve mention, because of the excellence with which they were played. Heather Arneson caught our eye as Zach’s assistant. This is a nuanced role, and Ms. Arneson made the most of it without ever stepping on Zach’s toes. Also, critical favorite Mauro Bozzo makes the most out of a limited number of lines by his sheer stage presence. His “Gregory” is well-formed.

In a show this well-played, areas of improvement are hard to find. We know that the young man who came out for the closing number Saturday night with his fly open knows about it and will correct the matter. We will let that bit of business go untagged.

On social media, we called this a classic show at a classic theatre, and so it was. But this cast, choreographed and directed by this leader, raises it above the landscape norm. Make your plans soon, because this kind of show is whipping cream on the kitten whiskers of South Sound theatre crowds. For sure, someone else is calling for tickets right now! Be next in line.