The Book Club Play: Come for the Books and Stay for the Drama 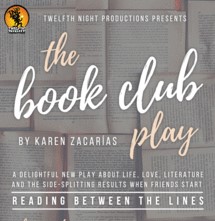 The Book Club Play, a modern comedy by Karen Zacarías and produced by Twelfth Night Productions at the Youngstown Cultural Arts Center, is a piece that proves this book club is no ordinary group.

Set in modern day, this story follows, you guessed it, a book club. The catch for this motley crew however is the presence of a camera that records every private and dramatic moment. With an omnipresent red recording light looming over their heads, secrets are revealed and friendships crushed as the book club slowly falls apart under the constant pressure of the camera.

Providing an amalgamation of topics and ideas, this show covers a range of themes from the question of reality versus appearance to others like control and finding your “flower of life” as quoted from one of their biweekly readings, The Age of Innocence. Many of these ideas are embodied by the character Ana as she works to be her “better self” and assert her control over the book club’s proceedings but is constantly thwarted by the other group members. By the end of the story, Ana, along with the book club’s other members, come to many realizations about themselves and each other, becoming better people for it. The show’s lack of focus on one central theme does make it a little difficult to be sure if there is one predominant idea that should be learned from it; for example the unclear purpose of the camera that is meant to possibly function as a social commentary on how people change how they act or solely as a comedic convention used for creating drama and ironic situations. Regardless of this ambiguity, the show gives a strong overall sense of togetherness and truth that brings the ending, and all of the characters, to a happy close.

Although it is not really at the forefront of the production, the play’s discussion of themes like what is culture and whose voices get told is compelling to witness as arguments rise up within the group and new books are suggested (Twilight being an especially fun one). While this conflict seems to serve mainly for a comedic effect and as a way to drive Ana to the breaking point, it is a very relevant topic that examines what people think of as culture and whether popular media such as American Idol or Dan Brown’s The DaVinci Code should be grouped in with classic literature such as Moby Dick, War and Peace, and Ulysses. In addition to ideas of culture, the show gets into topics of diversity and who is represented both as makers of literature as well as the people who get to read it, a question that bubbles to the surface after the five friends realize they have essentially only read books by dead or living white men as well as a handful of dead white women. While it is not the main focus of the play, it is wonderful that these ideas were kept in mind and brought up throughout the story rather than being glossed over or tossed under the rug.

The actors’ work building off of Zacarías’s characters is the highlight of the show. Because the story focuses more on characters rather than plot, it almost feels as if the play is an experiment, putting these different types of people in a room together and watching what happens. It is extremely captivating to learn about each character as they develop and explore the differing relationships or dynamics they share with the other group members. Actress Emma Wilkinson stands out as particularly splendid and impressive in this production, forming the backbone of the show through her perfect sense of physicality and emotion necessary for this integral role. Actors Levy Brunette and Steven Sterne must also be praised for their equally hilarious performances that add the perfect dose of comedy amidst some of the show’s more dramatic moments.

The deeper emphasis on character in this show makes it stand out among many of its contemporaries but can also cause it to suffer slightly from a lack of action for some people. This absence of movement is remedied however by a plethora of drama and revelations, keeping the audience on their toes throughout the entire show and leaving them satisfied with their experience.

The set and costume design by Christy Curino, lighting design by Jacob Viramontes, and sound design by the cast and crew work wonderfully together perfectly to provide a seamless, warm, and cozy book club feel while also acknowledging and uplifting both the nuances and subtleties of each character in addition to the story’s comedic elements. Their efforts elevate the show in a way that adds immensely to both the story and the audience’s experience.

If you are a book lover yourself or just love the drama of reality tv shows, this show is for you. Even if you just need a break from the monotony of everyday life, I guarantee that this feelgood comedy will bring at least a few laughs to your day.