A night as sweet as Vanilla Ice Cream at Village Theater 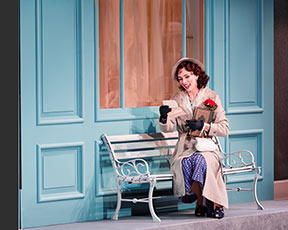 At first glance, the musical She Loves Me may come across as fluffy and sweet as a Hungarian Kreme – delightful though perhaps a bit unsubstantial. However, it only takes a few moments with the beautifully drawn characters to see that the story goes much deeper. Joe Masteroffs book, enhanced by music by Jerry Bock and lyrics by Sheldon Harnick, is an ode to the common, everyday existence. The musical is populated with characters grappling with trials such as keeping their retail job, being stood up on a blind date, and not wanting to go to work on a beautiful day. They also deal with the eternal struggle of yearning for genuine connection while still feeling the need to hide one’s true self behind a facade. The “happy ending” that the characters are longing for is not fame nor fortune but, as Director Karen Lund says in her director’s notes, “a happy marriage, a steady income, and meaningful friendships.” 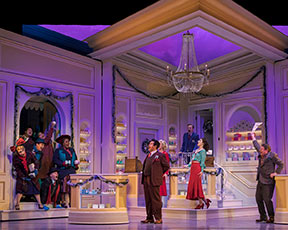 The story takes place in Budapest in 1937 in and around Maraczek’s Parfumerie. We learn quickly that each staff member of this quaint little store has their own complicated backstory. Two employees (Steven Kodaly and Ilona Ritter) are having a not-so-secret affair; store owner Mr. Maraczek is worried about the fate of his business; and Georg Nowack is involved in a relationship with his mysterious pen pal known only to him as “Dear Friend”. Then, in comes Amalia Balish, a slightly nervous though assertive woman seeking a job. Amalia and Georg immediately butt heads. She is hired over the strong objections of Georg and now our sales team is complete. 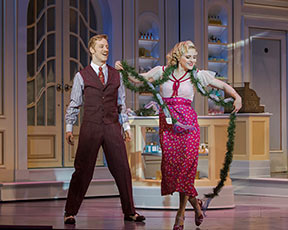 The seasons change and time moves forward. Steven and Ilona are still caught in their dysfunctional affair and Mr. Maraczek is getting increasingly unpleasant for cryptic reasons. Unbeknownst to everyone but the audience, Amalia and Georg are (gasp!) each other’s mystery pen pals. While they pour out their hearts to one another by mail, in person they continue to push each other’s buttons. As in all good romantic comedies, the ending is eventually happy, the villains get their just desserts, and the curtain closes on a kiss. 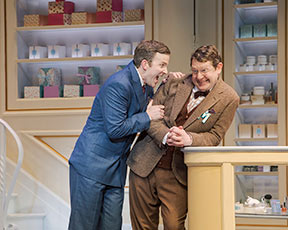 To truly show the depth of these delightful characters, it would take a stellar cast and spot-on direction and this production does not disappoint on either count. In the roles of the sparring, Beatrice and Benedict type lovers are Eric Ankrim as Georg Nowack and Allison Standley as Amalia Balash. Neither are strangers to the Village stage and from their performances, it is clear why. Ankrim is the consummate everyman. His tenor is easy and expressive and he seems incapable of having a false moment. Ankrim seems to emit a genuine, unassuming, yet decidedly leading man light from his very pores. Standley is a superb foil to Ankrim. Her soprano is brilliant and impressive. She is delightful and funny and is not afraid to let the veneer of the typical ingenue fall in service of an honest emotion or a joke. 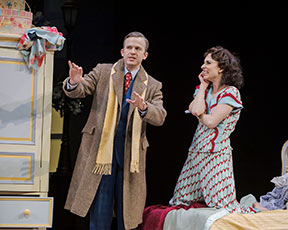 Randy Scholz as the womanizing Steven Kodaly is the perfect mix of charisma and sleaze. As Kodaly’s on-again/off-again lady-love Ilona Ritter, Taryn Darr is earthy and sexy and achingly vulnerable. Rafael Molina and Mark Emerson as Arpad Laszlo and Ladislav Sipos respectively, are enjoyable and round out the world of the little parfumery magnificently. Eric Polani Jensen as the earnest and impassioned Mr. Maraczek brings an incredibly commanding presence (along with a somewhat confusing British accent) to the role. 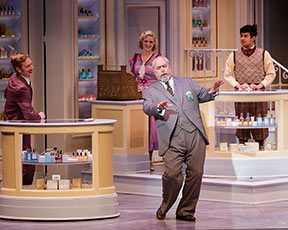 Under the direction of R.J. Tancioco (or Michael Matlock on certain performances) the vocals are outstanding and the orchestra is top-notch. Special shout out to the virtuosic playing by Winnie Dingey on the Violin. Thanks to Scenic Designer Matthew Smucker, Lighting Designer L.B. Morse, and Costume Designer Esther Garcia we are transported to a frothy, candy-coated 1930s Budapest. With Lund’s deft direction, this beautiful production walks the fine line between the stylized performance required of this era of musical theater and presenting an authentic story with heartfelt relationships.

She Loves Me is playing in Issaquah at the Francis J. Gaudette Theater through February 23 and at the Everett Performing Arts Center February 28 – March 22. For tickets and more information visit villagetheatre.org