Revive: A Window into the Mind of a People 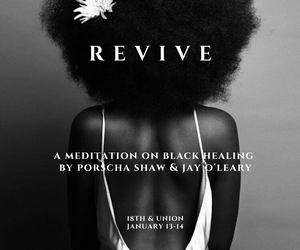 18th and Union’s newest world premiere production: Revive, a two-person show created and put on by Porscha Shaw and Jay O’Leary, brings together an impressive conglomeration of poetry, music, and movement to create an astoundingly real and rooted experience in black culture. Centered around the desire to celebrate and acknowledge a culture that has been suppressed and shrouded in negativity for many years, this show aims to provide an exploration into the thoughts and feelings of those deeply embedded within it by people who live it and experience it every day.

Authors Shaw and O’Leary first began assembling this show after a meaningful conversation on a beach one day where they discussed their common desire to communicate what they were feeling in a way that combated common perceptions of blacks and showed the beauty and complexity behind them. They present this idea during a scene in which the actors are suffocated by an onslaught of voices that define them as mere objects, incapable of feeling. This barrage continues until the two actors are visually choking and struggling for breath. Once the suffering is over they do not fall victim to these voices, however, but acknowledge and rise up from the pain and hurt to show their strength and worth. Rather than fighting against these voices with aggression or hostility in order to achieve their goal, Shaw and O’Leary execute a creative and expressive performance that is both mentally and spiritually uplifting. Through this reflection the audience is able to view and come to understand who black people really are through their own lens rather than through the eyes of other people.

At the forefront of this performance is the central idea that while blacks have been hurt or are hurting, they are neither broken nor in need of being fixed. As can be seen throughout the performance, while their suffering is important to their sense of identity it does not define them. During the show, each time the actors are mentally or physically beaten to the floor they always get back up, with their source of strength seeming to come from each other.

It is this sense of community that also characterizes the performance, driving and intertwining each sound and movement. Made clear both from the actors themselves as well as the interactions and conversations held before and after the show, this idea is abundantly true and apparent. To emphasize this connection the actors embrace multiple times as a form of assurance and sense of togetherness tethering them together through their moments of vulnerability and strength. Near the end of the show this link is demonstrated through a washing of the feet as each actor takes a turn gently washing and drying each other’s feet. This display of almost motherly care between two people reveals a very deep and unbreakable bond not solely between them but between everyone in their community.

Unlike some more traditional performances, Revive seeks to accomplish its goals, not so much through dialogue, but rather through song, spoken work, and dance. Because of these artistic choices, this compilation of art comes off more as a stream of consciousness, lending the audience a window inside the minds of the two actors. While from the viewpoint of a casual observer this production may come off very strange and extremely abstract, once the performance continues the viewer become increasingly pulled in, engrossed by what they see and hear. Seeing and hearing the actors’ combined words, facial expressions, and movements lends the audience a clearer view into the feelings of suffering, strength, and sense of self than any other mode of expression. As humans, observing these emotions brings the audience members closer to the actors as they perform, truly feeling and understanding what the actors themselves feel.

The performance and acting of both Porscha Shaw and Jay O’Leary tie the entire show together to a perfect point. O’Leary’s body movements and facial expressions are completely visceral, allowing for the audience to really understand what she wants to say. Shaw’s composition of the music and beautiful singing provide an etherealness to the production that only adds to its dreamlike and stream of consciousness qualities.

As a world premier that is in its early stages it was uncertain what would happen going into the show. It should be said, however, that although there are some small bumps in execution due to the fact that it was essentially written, choreographed, composed, designed, and performed by the two actors alone, the show is an undeniable success. Considering all of their work, it appears that Shaw and O’Leary have accomplished the goals they set out to achieve with this production and left the audience with a knowledge and understanding they did not have going in