From the opening swell of strings in the overture of Eugene Onegin, the strength of Tchaikovsky as an exceptional symphonic composer is obvious. Music critic Harold C. Schonberg wrote that Tchaikovsky had a “sweet, inexhaustible, supersensuous fund of melody”. This is used to great effect to bring the unlikely source material of Pushkin’s novel to life as well as earning Tchaikovsky a place as one of the few recognized Russian opera composers. 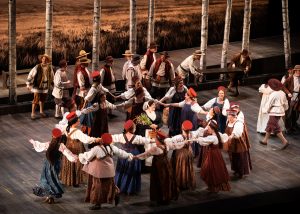 The curtain opens on the estate of the Larina family. Two generations of women – the young and idealistic sisters Tatyana and Olga and their more jaded mother Larina and nurse Filipevna –  expound their different perspectives on love. After some charming folk dancing and singing from the workers on the estate, in saunter Lensky (a young, idealistic poet and Olga’s fiancé) and his friend, Eugene Onegin. Lensky and Olga are clearly smitten with each other and Tatyana has a hard time hiding her instant attraction to the enigmatic Onegin. Unable to sleep due to her growing feelings for Eugene, Tatyana spends the night confessing her love in a letter which she sends off hastily the next morning. Under the guise of pragmatism, Onegin swiftly rejects the advances and warns her to control her feelings more in the future as a less understanding person wouldn’t be so kind.

When next Eugene and Tatyana meet, at a party in Tatyana’s honor, she spends the night avoiding him and he spends the night dancing with Olga which does not go over well with her fiancé. This leads impulsively to a duel and Lensky, the embodiment of true and earnest love, is killed. After five years of exile, Onegin returns to find Tatyana has married an older, wealthy Prince and is now the toast of the town. He now finds her irresistible and admits she has stirred up feelings in the depths of his previously cold heart. In the end, Tatyana spurns his advances, reminding him of how icy he was to her when she first confessed her love to him and how close they both came to true happiness. 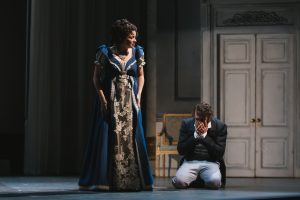 As the titular Eugene Onegin, John Moore (sung on alternate performances by Michael Adams) brings back to the Seattle stage the rich and sumptuous baritone we have come to know and love. It is easy to focus on the big (and truly spectacular) moments of the character’s arc – his rejection of Tatyana, the duel, the dramatic expression of love – however, it is in the small, subtle moments and physicality that Moore shows himself to be an incredibly accomplished actor. The shades and nuance he displays bring the character fully to life and the audience is able to find some, dare I say, empathy for him by the end of the opera. 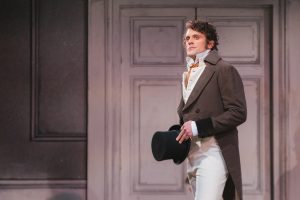 Marjukka Tepponen as the romantic Tatyana (sung alternately by Marina Costa-Jackson) brings a sweet and expressive soprano to the role. While much of the time the character must be restrained and well-behaved, when she is allowed to let her true feelings out, Tepponen shines. She conquers the herculean “Letter Scene” with fervor and passion. As the caring nurse Filipevna, Meredith Arwady is warmth and nurturing personified. From the moment she opens her mouth and the gorgeous mezzo-soprano fills the stage, you can not help but smile. In the role of the doomed poet Lensky, Colin Ainsworth is so sincere and heartfelt, it almost seems counterfeit. However, through his beautiful performance and his vibrant and resonant tenor, we discover he is nothing but genuine. 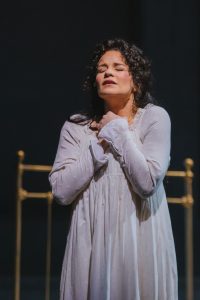 Eugene Onegin is being performed at Marion Oliver McCaw Hall through January 25, 2020. It is in Russian with English captions. For tickets and more information, please visit https://www.seattleopera.org/on-stage/eugene-onegin/.