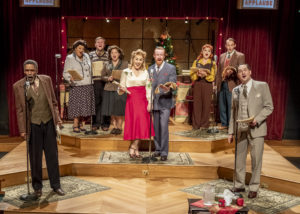 Angels rush in where fool’s fear to tread.

On the first weekend of Advent, Taproot Theatre opened their Christmas show, not only with an original adaption, by director Karen Lund, of the heartwarming 1949 Live Radio Play, The Bishop’s Wife, but with the Dicken’s Carolers greeting the prospective audience, and the public, on the sidewalk outside the theatre. In terms of Live Radio, Taproot got everything right, in addition to the play, there were hilarious commercials for the local companies sponsoring it, and lots of authentic 40’s touches and audience participation.

Originally a 1947 movie, adapted from a 1928 novel by Robert Nathan, starring Cary Grant, Loretta Young and David Niven, its first radio production was on December 19th, 1949 by Lux radio. Like another holiday favorite, It’s a Wonderful Life, it tells the tale of an angel coming to earth to guide a group of interconnected humans through all their worldly crises. In 1996, there was a remake, The Preacher’s Wife, with Denzel Washington, Whitney Houston and Courtney B. Vance. 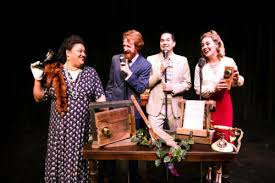 The plot revolves around a strung-out newly appointed Bishop, who is too focused on raising money for a new Cathedral rather than on his own spiritual needs and the emotional needs of his wife and daughter. In answer to his prayers, a rather too slick, charming good-looking character appears; who says he is an Angel named Dudley. Along the way, Dudley fixes a lot of problems and creates a few more. But in the end, everything turns out well. The wealthy control freak of a donor gives the money selflessly, the Bishop’s marriage is restored, their professor friend actually finishes the book he has been working on for 20 years, and the daughter gains confidence.

Beginning with Richard Ngugen Sloniker, as Dudley the angel, who walks a fine line between being charming and devious, the cast was splendid. Chelsea Le Valley as Julie, the Bishop’s wife, played a truly good person struggling with a troubled marriage and “emotional” temptation. William Hall Jr. played both the professor as an erudite intellectual then switched accents and personas to play Sylvester, a sarcastic New York Cab Driver. 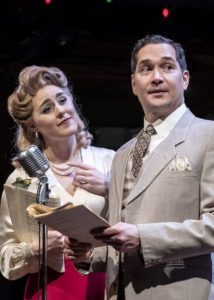 Many of the actors and the pianist played multiple minor roles very convincingly, which was a delight to see. Rebecca M. Davis switched roles from a formidable wealthy society gorgon, to a little bratty boy soprano, to a slimy announcer trying to raise money, Jenny Cross, as Miss Crossway was a deferential secretary at times, a women overcome by hormonal attraction for the angel, and an under confident little girl. Perhaps the most impressive was Kevin Pitman, who played a 1940’s announcer to perfection, and filled in for numerous other roles, while changing his voice, accents and demeanor impressively. 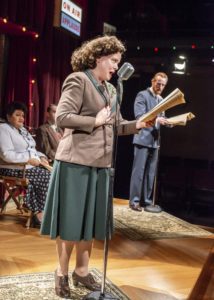 Along with the exquisite and authentic costumes by Esther Garcia, the hairstyles of the women are to be commended, they were vintage 1940’s especially Ms. Le Valley’s . The Scenic and Sound Design by Mark Lund was attractive and in keeping with the Christmas theme. 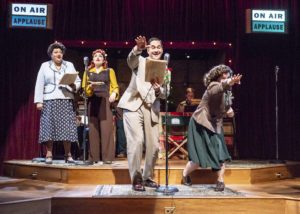 On opening night, the show was a bit slow-paced but that will probably be corrected during the run. It was a charming and fun evening and I recommend everybody to see this show.