Dukesbay Productions in Tacoma has always been one of the South Sound’s more admirable operations in the theater community. Founders Aya and Randy Clark’s passion for producing, directing, and casting shows that represent all ethnicities is an example to emulate. If for that reason only, Dukesbay deserves consideration for your community theatre dollar and appreciation. But, “for that reason only,” is no longer valid if it ever was. In the last three seasons, Dukesbay has thrown award-worthy haymakers at the larger houses. In particular, Agnes of God,” last season garnered Best Play consideration and put the big houses on notice. “Kitschy little theater?” “Under the radar?” Don’t bump your head on our trophy case.” Here’s the deal, though. Success breeds expectations. Can they do it again, or were those two shows outliers? “Prove it.” “Proof” proves it!

Written by David Auburn and directed by Randy Clark, “Proof” is a stirring drama in the vein of the movie “A Beautiful Mind.” But, where that movie zigged into a study of madness (sorry if you haven’t seen it), “Proof” zags into a mystery and an examination of trust and commitment. How many people in this cast are sane? One? Two? None? All of those possibilities cross the mind of a raptly attentive theater-goer. The rapt attention is partly the plot, but the rest of it is the startlingly effective performances by this cast. Trust me, Drama in the Hood loves good theatre, but we covet the term “tour de’ force” and rarely let it on the page. Cast members (multiple) in “Proof” deserve the accolade.

Dukesbay semi-regular Chevi Chung plays Catherine in this show. The daughter of an esteemed mathematician Catherine is early on in her own numbers career. During this show, Catherine appears to be, in turn, the only sane person (albeit, with hallucinations), the only insane person, one of several insane people, and a glory-seeking fraud. Chevi Chung didn’t just make them all plausible. She made them appear inevitable in their moments! Dukesbay is very lucky to have her in their shows, but this role, in particular, was the best we have seen her. 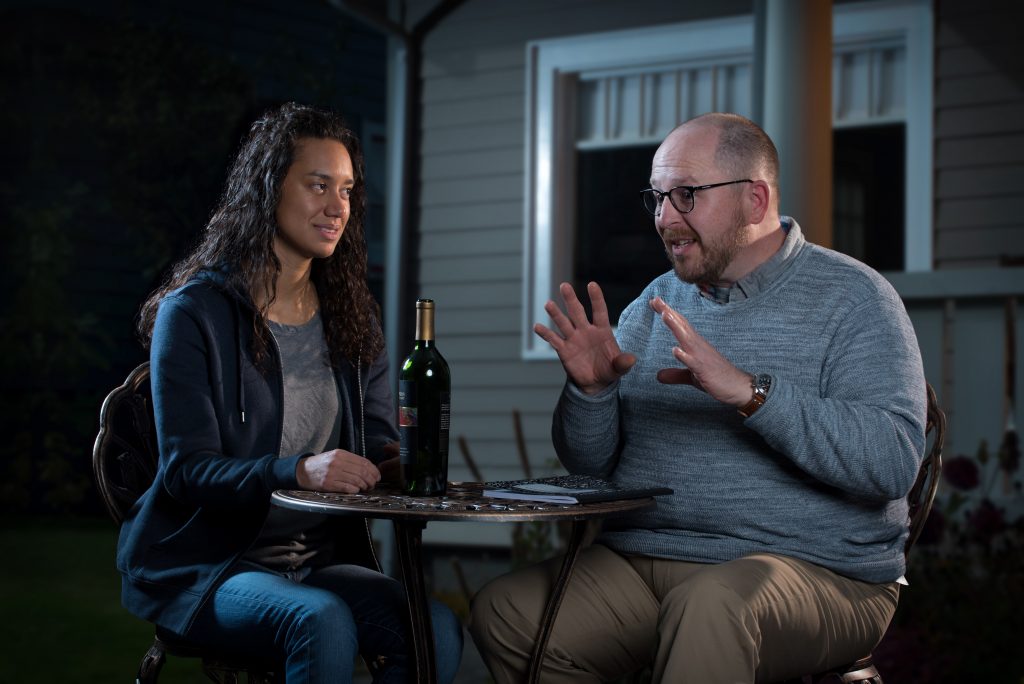 Nick Fitzgerald brings the same intense professionalism to the role of Hal in this show as he did on this stage in “Bent” for The Changing Scene Northwest. Smitten with Catherine, Hal admires her and suspects her all at the same time. The audience can see the angst on his face, as Mr. Fitzgerald wrings the most out of his character. It is a performance that’s a joy to witness from the up-close-and-personal seating arrangement at Dukesbay.

One note about the relationship between Catherine and Hal. The restrained expressions of affection at the outset of their relationship were appropriate when the couple was at that stage. Post-coital kissing and canoodling, though, is usually a matter of greater ardor. Just a thought to add to the outstanding performances.

Amy Van Mechelen’s Claire feels like she got to a party late, and no one told her where the chip dip had been hidden. She’s Catherine’s sister, far from her equal in terms of I.Q, but far more advanced in common, every day, sensibilities. Left to help Catherine work her way through a personal tragedy, Claire does what so many of us would do…especially if we doubt the mental acuity of a loved one. Claire wants to care for her sister, do it from close range, and perhaps offer some psychiatric help in the process. When Cathrine resists, Claire applies additional pressure, as siblings are wont to do. But, the role is not just one mood but is a nuanced one. Ms. Van Mechelen finds every nuance, and hers is another great performance in a show full of them.

Erik Hill’s Robert is another example of how close to perfection this show reaches. Regional accents are tricky to learn and harder yet to maintain over two hours on stage. Robert is from Chicago, and natives of the Windy City would welcome him as one of their own. “Pasta” comes second nature to people on the west coast. But “pass-tuh” is a noodle dish served to Chicagoans! We would be remiss if that was the sum total of our appreciation for Erik Hill’s work. A SAG/AFTRA member, Mr. Hill brings his expertise to bear in some brilliant exchanges with Chevi Chung’s Catherine. His role isn’t the biggest one, but it is the glue for this show. We offer a sincere “bravo” to Mr. Hill and to the rest of this memorable cast.

One note about staging: Dukesbay Theatre presents some challenges to the staging community, but the set for this show surpassed expectations. Hector Juarez, Jennifer York, and Erin Chanfrau brought siding in from across town and built a house inside the Merlino Arts Center. Go see the show and tell me that’s not true.

But mostly go see the show. Quality theatre deserves support, and you (a theatre lover or you wouldn’t read Drama in the Hood) deserve a blessing from the stage. “Proof” is a blessing, deserves to play in front of capacity crowds, and then need to extend its run to Christmas. Let’s make it happen!