TLT’s “Evil Dead: The Musical” Simply the Most Bizarre Thing

“This reminds me of…” is something no person ever has said about “Evil Dead: The Musical. We are not just talking about this season of community theatre. Nor are we talking about the five years I have been covering community theatre. No one in the history of human speech has ever been “reminded” of something else by this play. That was Drama in the Hood’s thought process 56 times throughout the show that Tacoma Little Theatre opened this last weekend. Theatre critics are not often short of words (and trust us, we’ll get there), but this is the DARNDEST thing you’ll ever see on stage.

Based on the low-budget 1983 movie “Evil Dead: The Musical” takes gory campiness and turns it into a celebration of the same. People on stage are losing their minds or various body parts, but they never stop singing or playing out the stereotypes that go with their characters.

Five kids “borrow” a deserted cabin deep in the woods. Two are in love, one is scared, another is an oversexed lout, and the fifth (a virtual stranger to the others) takes care of the fourth’s needs at the drop of a hat. Pretty easy to follow? Probably, because Hollywood has been churning out the formula since film began.

Directed by Niclas Olson (if you met him, you would never believe he had this in him) formed a cast that is having the time of their lives. The bloodier the stage becomes, the more they throw themselves into their roles.

Zachary Edson plays Ash. Equal parts philosopher and romantic, Ash ponders the deep questions of life. His girlfriend Linda, played by Ashley Roy, admires Ash, and the love story is made for The Hallmark Channel until the blood starts to flow, and evil takes over. A familiar tale you’ve doubtless heard a million times.

Mr. Edson is superb in the role of Ash. He exercises his inner Jean-Paul Sartre and Freddie Krueger in equal measures, while Ms. Roy continues her professional growth with this physical-romantic-parody-of-a-gruesome-cult-classic. Everyone needs that on their resume’. These are two pros who deserve to open shows. Ashley Roy’s choreography expertise was also on full display. She’s a quadruple threat actor-singer-dancer-choreographer and one of the best in town. 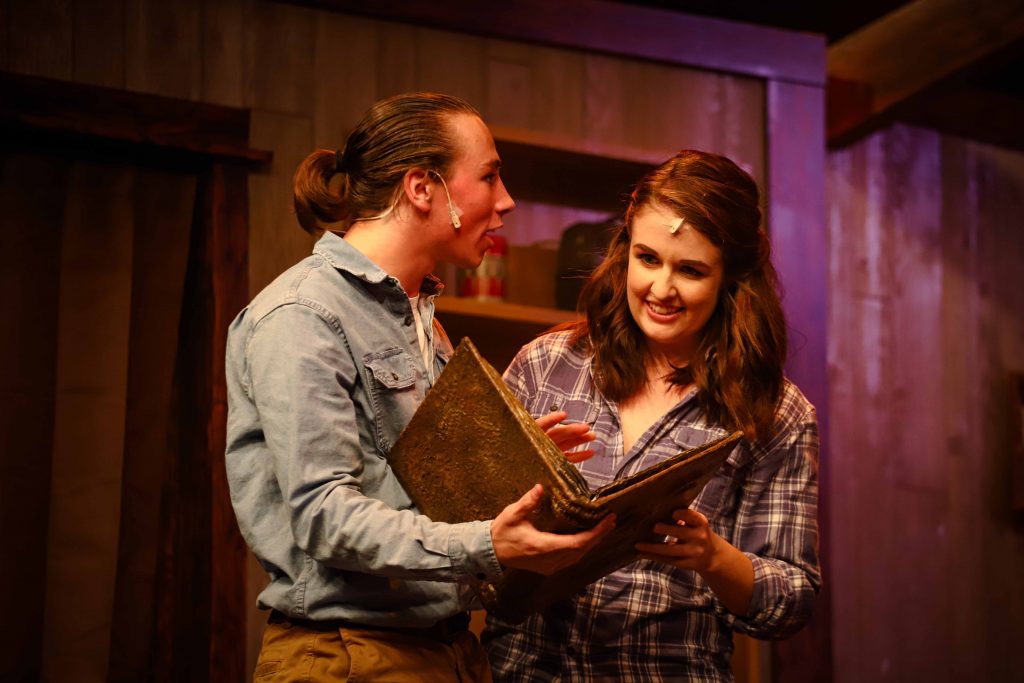 Zachary Edson as Ash and Ashley Roy as Linda in “Evil Dead: The Musical” All photos by Dennis K Photography.

Molly Quinn plays Cheryl, who begins the show as a bit of a shrinking violet. As such, we thought Ms. Quinn was fine. Then, after her transformation into the cellar-dwelling wisecrack artist, we thought Ms. Quinn was sensational! Drama in the Hood has rarely seen a better performance in which we could only see the top 2/3 of the character most of the time. Molly Quinn has comedy chops!

Is it wrong that we found the profane character in the show the funniest? (We don’t care, that was rhetorical.) Guy Taylor Simpson III threw his entire self into the role of Scott. A physical specimen with an IQ in the Peter Griffin range, Scott’s mind rarely rises above his belt. That’s probably a good thing because the world would be a difficult grasp for a bulb as dim as this one. Mr. Simpson was excellent.

Annelise Martin plays two very different roles in this show and plays them both well. The best singer in the cast, her vocalization, and acting skills were better on display as Annie, investigator of the paranormal. By the same token, it takes skill to play someone with as little on the ball as Shelly, investigator of Scott’s…parts.

In supporting roles, Aleks Merilo and Eric Strachan were effective, indeed. Mr. Merilo puts some interesting subtle nuance into a show that is about as nuanced as a blowtorch lighting birthday candles. Mr. Strachan added a little something good to every scene in which he appeared.

A show such as this one would not take off if not for  a hard-working and talented  artistic staff at work and having a significant hand in the operation. In particular, we noticed Jeffery Weaver’s touch in this show. Also, Blake York’s crew did a great job with the set, and Benjamin Bentler’s musical direction was masterful.

Very soon, your humble chronicler will mark his 200th reviewed show in less than five years. To see a different kind of show, such as this one is a treat. And to see this talented cast be shoulder-deep in gore and still singing on-key is a greater treat still. Before YOU get shoulder deep in Holiday prep, make plans to see “Evil Dead: The Musical.” Call the box office to see if “Splash Zone” seats are available. That will be a treat you will not soon forget. But, splashed or not attend this show. No one will cut your head off if you don’t…as far as I know.