Sunset Baby—To Heal or To Perpetuate

ArtsWest in collaboration with The Hansberry Project kicked off their newest season with a production of Sunset Baby by Dominique Morisseau. This show opened September 26th and run until October 20th. This three-person play follows Nina being visited by her estranged father, Kenyatta. She doesn’t know if he wants to try and mend their relationship or gain ownership of love letters written by her mother.

This production of Sunset Baby directed by Valerie Curtis-Newton is emotional and brilliantly directed. The technical aspects of the show were used to amplify the feelings projected by various characters, and the use of projections throughout the show was a unique way of creating the atmosphere. The set design was incredibly detailed and waiting for the show to start created a set that made me feel like I was actually viewing someone’s apartment.

Kenyatta, played by Marcel Davis, has monologues interspersed throughout the play that showed off his acting skills. He delivered these monologues with such sincerity and care, that I couldn’t help but be drawn into what he was saying. Aishé Keita, who plays Nina, gave a brilliant performance. Nina’s inner turmoil was clear throughout the whole show and made the audience sympathize for her. Tyler Trerise, who plays Nina’s boyfriend, Damon, gave a performance that made Damon a multi-faceted character. He starts off as being a sweet and caring boyfriend to Nina and ends as a very different character. The acting, lighting, and sound design meld together to create a piece of showstopping theater.

ArtsWest is kicking off their season strong, and Sunset Baby is a must-see production. The show runs until October 20th. Tickets are $20-$42 dollars, and they do offer TeenTix tickets for $5 at the door. 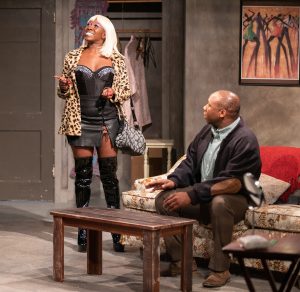 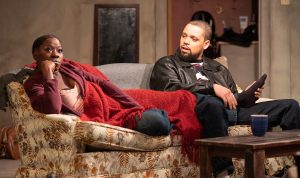 Sunset Baby by Dominique Morisseau. Produced by Artswest Playhouse and Gallery in collaboration with The Hansberry Project. At 4711 California Avenue SW in West Seattle. September 26 to October 20, Thursdays through Saturdays at 7:30 p.m and Sundays at 3:00 p.m. Tickets and more info: www.artswest.org