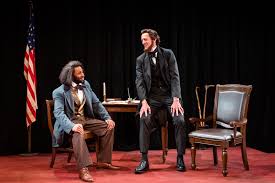 In 2012, Washington D.C.’s Ford’s Theatre commissioned playwright Richard Hellesen to create a historical drama; the result is his Necessary Sacrifices, a fanciful play that imagines what might have occurred during the two meetings Abraham Lincoln and Frederick Douglass had in their lives. What really occurred when these two dynamic men met will never be known, but Hellesen gathered historical documents, letters, newspaper quotes and a good deal of Lincoln and Douglass’s written work to present a convincing replica of the fireworks that might have been ignited during their discussions. The Taproot Theatre, employing the immensely talented Lamar Legend as Douglass and Ted Rooney as Lincoln now stages the play’s West Coast Premiere.

For a background image in Act One, scenic designer Mark Lund sets up a map of the U.S. divided by blue states and red states, sitting in an off kilter golden frame. It is 1863 in our nation’s capitol, and the times are out of joint. Frederick Douglass has called on Lincoln to argue for greater equality in the Union troops. Blacks are not paid equal wages and are in dire straits if caught behind enemy lines. Lincoln claims he must move slowly on these issues for a just democracy needs to listen and respond to all its constituents. At first glance the two men couldn’t seem more different. Legend’s Douglass is so tightly wound up he seems ready to self-combust at any moment. Rooney does a knockout job portraying the easy going but wonderfully astute president.

As the act progresses, commonalities emerge between the two. Both leaders were more or less self-taught. Douglass who freed himself from a Maryland plantation, cobbled together his education as he wandered on the outskirts of Baltimore’s white society. Lincoln famously read and wrote in his free time on farms in Kentucky and Indiana. Both men suffered the loss of a child and most importantly, the two share a fervent desire that their country do the right thing. Lincoln likens his job to the task of getting a herd of blind pigs onto the same boat. Douglass smartly suggests he simply open their eyes!

Act Two takes place the following summer, when Douglass was actually invited to the White House by Lincoln, who wants advice on how to bring freed slaves safely to the North. Douglass is focused on the unqualified abolition of slavery and the granting of the vote to blacks and all women. Though the two meetings actually produce no concrete policy decisions, director Karen Lund ensures the debates move along briskly as the play explores the need for compromises and sacrifices these two brilliant men face during America’s greatest period of upheaval. At one point, Lincoln quietly admits that he is “wiser today than I was yesterday.”   The work makes it abundantly clear that Lincoln and Douglass were immersed in a nearly impossible but necessary task: beginning the process of closing a two century old wound.

Necessary Sacrifices runs through October 26 at the Taproot Theatre’s Jewell Mainstage. The theater sits in the heart of Greenwood at 204 N 85th Street. For more ticket information call 206-781-9707 or go to .