The Changing Scene Theatre Northwest is one of the hidden perks of this job. An itinerant theater company from its Kitsap County origins, The Changing Scene Theater has played in nooks and crannies throughout the South Sound. Now, safely ensconced in Dukesbay Theatre, TCSTN has put forth a solid roster of shows over the past two years. Last season, the plucky little company, led by Pavlina Morris, hit the big time and went head-to-head with the more well-heeled theaters in the area when it presented the taut drama, “Bent.” A Best Supporting Actor award winner, and Best Play award nominee, “Bent” was the crowning achievement of The Changing Scene Theatre Northwest to date. The show proved that, while glitz and million dollar budgets are all well and good, great shows are  found wherever theater is presented throughout the Puget Sound.

This time, Changing Scene went back to its roots. Under-the-radar theater that occasionally bites, frequently causes one to think, and is known to elicit a guffaw or two. All of that, and more, is “Sublime Ridiculous,” written by Darren Hembd and directed by Ms. Morris herself. Drama in the Hood was there to see the first show of the second weekend.

“Sublime Ridiculous is eight one-act plays. The Changing Scene Theatre Northwest produced such a show during the holiday season of 2017 and came back for more. Ms. Morris brought back several players she has learned to trust doing this kind of show in the past and they were put to good use performing “Sublime Ridiculous.”

The first question we are asked when it comes to an evening of one-act is, “Did they all work?” Our answer is generally “No,” but that would be the case whether the writer was Darren Hembd or Neil Simon. But, enough of them worked to showcase a good roster of actors and material that was, at times, inspired.

One imagines Mr. Hembd and Ms. Morris sharing an adult beverage and talking about the actors they worked with that day. We imagine that because some of this show’s best work are send-ups of actors by actors themselves. In “Theatre 101,” three actors come to rehearsal unprepared and without more than a passing notion to cooperate with the show’s Director. The repeated refrain of “Okay, we’ll do it your way,” and “That isn’t in the script,” will ring true to every Director. Michelle Noel did her best work in this one.

The show closes with “Meta.” It’s actors, playing characters, when the line between the two gets fuzzy. Just as in “Theatre 101,” the actors are comfortable in the roles and Carol Wieltschnig was excellent. 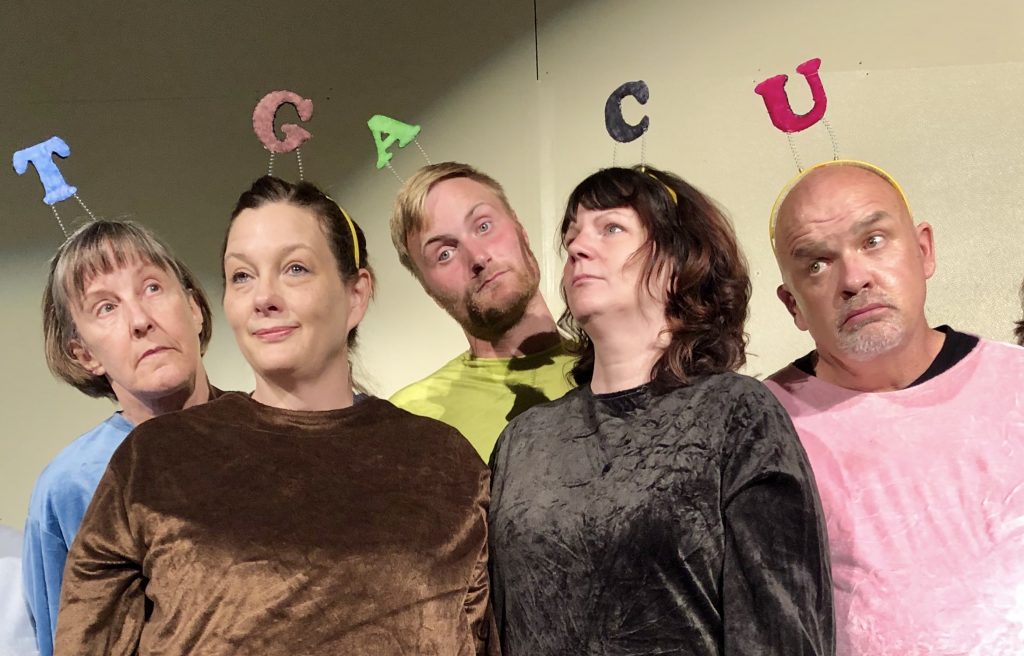 Eric Cuestas-Thompson is a nitwit! No, really. That’s the role he plays in “The Art of Fish Oil.” While Mr. Cuestas-Thompson was good in several roles, his “Arr” in this one-act made us laugh. He throws his whole upper body into that buccaneers expression. Michelle Noel was solid in all of her roles, and was a good player in this pirate tale. Joseph Magin was good in Fish Oil, but his finest moment was yet to come…

… in “Spare Some Kibble.” We all know that cats are imperious and dogs have the personality of a five-year-old with a Dairy Queen dipped cone on board. But, the personification of all this has never been done better than Mary Sheehan and Joseph Magin in this one-act routine. Mr. Magin’s transformation from satisfied canine to starving hound was very well-done. This was the best one-act of the night.

Those were the best of the one-act plays that make up “Sublime Ridiculous.” There were some entertaining moments in “Very Off Script,” and some enlightenment about literature in “Yesterday’s Bookshelf.” Julie Cole was very good in that one. “Contemporary Suburban Zombie” was predictable, and “Bond With You” was the least entertaining of the eight shows.

For an evening of shows such as this one to work, there needs to be cohesion between the characters. Most often, someone comes off as the glue that holds the show together even as it tries to sail off the rails. Laurice Roberts deserved kudos as the glue that holds several of the one-acts in which she was involved together. Ms. Roberts was solid in every role, and stood out as one of the show’s best performers.

The Changing Scene Theatre Northwest played “Sublime Ridiculous” on Memorial Day weekend, trusting that the theater-lovers in town would hear about it and embrace the concept as well as the company. Predictably, the crowd Opening Night was light. Here is where you come in. To support theater companies such as this one is to carry a company across the finish line on your own shoulders. All theaters want you to come see their show. Changing Scene needs your support to continue to bring edgy, fringe-y, theater to the South Sound. As far as Drama in the Hood is concerned, Puget Sound theater’s virtual arc lights would dim if companies such as this one were to stumble and fall. Come see “Sublime Ridiculous.” You’ll think, chuckle, laugh out loud and leave knowing you helped something worth helping.

An Evening of One Acts–Martin, Allen and Shepard’s Visions of Life in America Explored at the ACT
July 29, 2014
© 2022 Drama in the Hood. All rights reserved.
Site Design