“Professional theater is back in downtown Tacoma.” That’s the buzz on the street and in the theater community in the South Sound. Indeed, the four downtown theaters, namely Theater on the Square, the Rialto, Pantages, and Tacoma Armory are all facilities that can support the pros. The acoustics are superb, and the seating is ample. That’s all well and good if the product is acceptable, and Friday night’s performance of “ART” for Tacoma Arts Live was more than acceptable. It was an example of superb actors sublimely playing off one another. Drama in the Hood was there to see news being made. We were pleased to see art being made, as well by the three actors that put “ART” on stage for the public.

“ART” is a story of three men and a canvas that may or may not be blank. Whether there are faint lines and fainter colors, or vice versa, is the crux of the dialogue, but, that is far from what this play turns out to be. You see, Serge, played by Eric Clausell, bought the ersatz piece of art for a handsome sum of money. Filled with pleasure over his purchase, Serge invites Marc, played by Joshua Knudson over to see it. That starts a chain of events that renders the “whether or not” of the canvas moot. Because by the end of the evening Serge, Marc, and their mutual friend Yvan have painted a picture for the audience with vividly colored words that are at once insightful and hideously cruel. The evening turns out to resemble an all-male “Who’s Afraid of Virginia Woolf,” with less liquor involved.

It’s effective theater that is, at times, hard to watch. The cutting words hurt the receiver and the audience alike. That said, it is an absorbing night of drama, that allows these three actors room on the large stage to grow into the conflict and come out the other side, changed and hesitant, but intact.

Some plays are music and frivolity, held together by a thin plot. There is a play (multiples of the same play, actually) in the area that fits the description. “ART” isn’t that. This is a fraught piece of work that is psychologically draining. While all three actors take their moment in the harsh glare of “fraught,” Joshua Knudson’s Marc is the most afflicted. Mr. Knudson’s brow furrows with the stress of living with this uber-alpha male inside. 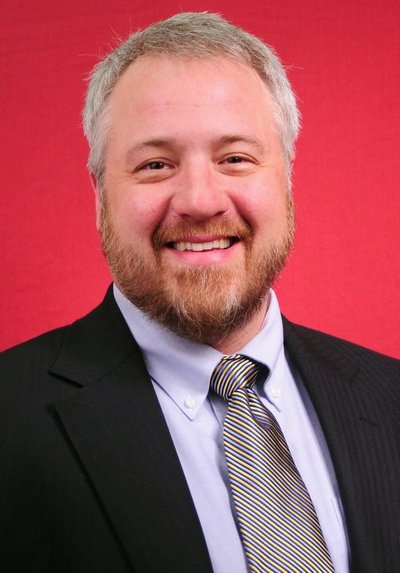 We have all known people who take the temperature of the room to make sure they are being heard and respected. Marc’s thermometer is constantly in action. It’s all about him and, if it isn’t, he will know the reason why. Mr. Knudson’s performance was astounding in portraying the many layers of Marc, and all of them turned to 11, with the knob snapped off. 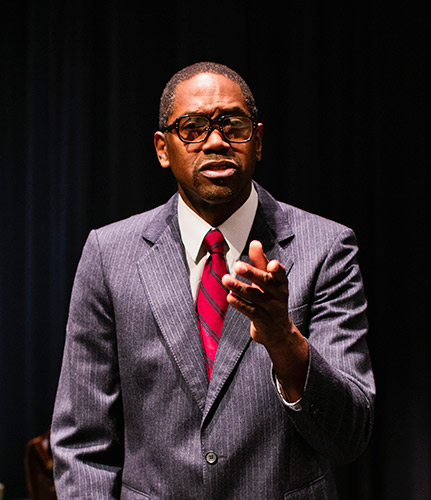 Mr. Clausell’s Serge, on the other hand, is comfortable in his own skin and with the choices he has made. There’s no doubt in Serge’s mind that buying the controversial piece of wall art wasn’t actually controversial at all. When his friends gang up to laugh at him, Serge first defends the canvas. When it is time to defend himself, Serge is less sure of his footing. Mr. Clausell explores his character carefully, but with an artist’s touch. He’s a pleasure to watch work, as he has been every time he has taken a South Sound stage.

David Fischer’s Yvan may be the most difficult character in the play. Yvan is most comfortable as a blank canvas in his own right, waiting for someone else to draw him. Yvan’s life’s decisions have brought him to a vanilla place. Each time he has stepped out in search of chocolate mint, or pineapple coconut, things have not gone well. He tries to find out what others want from him, so he can give it to them. It’s a safe-ish way to live, but it doesn’t work with Marc and Serge. They demand that Yvan take a stand and the audience is rapt with attention as he slowly, steadily, unravels. Yvan is a difficult role, but Mr. Fischer never wavers and never misses a step. 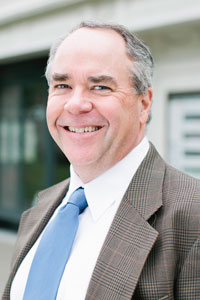 The dialogue heavy show was not without glitches Friday night. At one point, an actor inexplicably pronounced “masterpiece,” as if the last syllable was a euphemism for urination. The mistake threw him to the point that he blew another line shortly thereafter. Obviously, he will pull that together in future performances. Otherwise, the actors hit their cues and interacted with one another as the pros they are. Director Brett Carr cast this show superbly and deserves his share of the kudos.

“ART” is a show that enables the cast to be fully in character, even as they occasionally speak directly to the audience. “ART” is artistry, writ large for an appreciative audience. We have no qualms about recommending it to everyone who cares about theater. Tacoma is lucky that “ART” is on the local theater curriculum.