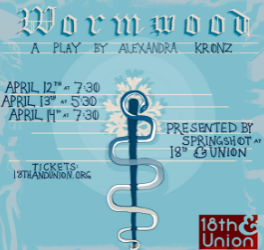 As a part of Springshot Festival, 18th & Union are staging Alexandra Kroz’s Wormwood for three nights this week. Wormwood is directed and performed by an all female cast and the plot evolves around parenting and motherhood. The play accurately displays the common reality of relationships between teenagers and their parents. It depicts how rude and disrespectful the children can be towards their parents, however, it also shows how parents tend to impose authority on their children.

Wormwood is Kroz’s debut as a director and covers themes such as American cultural construction of motherhood, capitalism and parenting. The main character Linda, played by Cassandra Leon, is a single mother doing her best to protect her teenage girl Chris, played by Sammy Hope. Regardless of how Linda’s intentions are solely focused on the well being of her daughter, her life perspectives notably affects her daughter’s life and health in somewhat negative way. Linda’s attempts of keeping Chris close and under her control, by forcing her opinions and life beliefs, distances them even more. And somewhere in the play, it makes clear that controlling and protecting your child are two different things. Wormwood would feel relatable for most of the audience as everyone goes through that rebellious phase during the early years of their lives. It also might appeal to most of the mothers, who stay at home, raising and taking care of their children, as it perfectly visualizes the motherhood frustration. It’s a common culture that our society expects mothers to focus on their children, diminishing their chances of chasing a career and the mothers in Wormwood are clearly constructed to show that.

The set of the play seemed very simple and the costumes were clothes we wear in our daily lives as the play’s central theme is fairly realistic. 18th & Union is a small theatre so there was no need for microphones, which I think, helped in emphasizing how talented the actors were. Their voices were loud and clear enough to be heard for the audience sitting in the back row.  They were skillful in conveying the reality of our lives and the plot had just the right amount of comic relief between its misery.

It seemed to me that Wormwood encourages parents to be more open minded and considerate of their children’s desires. It relays a message that having control over your child is a good thing but if it exceeds its limits, it has a tendency to deprive your child of freedom and that is something you would not want to do, as it can affect your child health both physically and mentally. Wormwood might make you question yourself whether the things you do for your child are for your own satisfaction or for them, because what you want for your children is not always what they want for themselves.