“The Drowsy Chaperone” is a clever slice of theater that was first developed in 1998 by  Bob Martin and Don McKellar with music and lyrics by Lisa Lambert and Greg Morrison. It is part homage and part farcical send-up of the great Broadway shows in the first 1/3 of the 20th Century. It had its own Broadway opening in 2006, and opened on London’s West End a year later. The story (as acknowledged tongue-in-cheek in the show) is slight. But, the humor is broad and frequent. Tacoma Musical Playhouse opened “The Drowsy Chaperone” this weekend, and played to capacity houses full of appreciative patrons who know a good spit take when they see one.

Tacoma Musical Playhouse Managing Artistic Director and Co-Founder Jon Douglas Rake plays “The Man in the Chair.” Mr. Rake’s stage expertise is on full display, and he chose himself for good reasons. “The Man” is 75% narrator/M.C. of the show, but he occasionally inserts himself into the action. It is a role that asks its player to perform with a delicate balance. Too much “Man” and the lush extravaganza is lost. Too little “Man” and the clever set-up becomes lost in the lushness. Most generally, Mr. Rake’s role is as Director and Choreographer. But, his turn as a main character is very well-played.

One of the plots that support the mayhem is a bride and groom seeking to avoid seeing each other before their wedding. Played by Emma Deloye and Mauro Bozzo, Janet Van De Graaf and Robert Martin are delicious! Ms. Deloye is a rising star in this town, capable of the triple threat of acting, singing, and dancing, with each gift appearing as if it is her main gift. In this show, she divas out in a most fetching fashion, never missing a dance step or a line.

Mauro Bozzo is already a star in this town!  His Robert Martin makes anything, including the saying of his own name, an event! Mauro Bozzo’s performance is an exclamation point! Drama in the Hood can’t stop using them! The titular role is played from tipsily to full-on plowed by Nancy Hebert Bach, whose character invented the expression, “It’s 5 o’clock somewhere, hit me!” Ms. Bach is another star in a multi-starred cast.

People like to know who is the best singer in a musical, but the distinction is hard in this one. Both Emma Deloye and Nancy Hebert Bach can wail and we imagine it will depend on which performance you see as to who is the best singer you hear. On Sunday afternoon of Opening Weekend, Ms. Bach was slightly more accurate, but they both bring power and precision to their songs.

The supporting cast is one of the best ensembles we have seen this year. Lark Orvick Moore is a delight as Mrs. Tottendale, and her time on stage with John Kelleher’s Underling are understated brilliance. Josh Wingerter’s George is one of the best performers on stage. That’s only appropriate, because he is Robert Martin’s Best Man. “Frazzled” is one of Mr. Wingerter’s finest talents.

John B. Cooper’s “Adolpho” is a ridiculous parody of a Latin lover, and Mr. Cooper parades about the stage with preening feathers. One of the funniest parts of a funny show, Cooper is at his best when he squeaks “help me.” It takes a comedic artist to know how to sell a two-word phrase and make it his best moment.

Sheri Tipton plays Kitty, who aspires to take Janet’s role as a lead actress if she, indeed, leaves show business and gets married. Ms. Tipton is a teacher in real life, and teaching is an honorable profession. However, Ms. Tipton is very talented as a stage actress and shouldn’t give it up. Kitty would be an easy part to take over the top, in a production that veers that way, anyway. Ms. Tipton walks right up to the line, but nails it by staying just short of too far. She’s a valuable part of the supporting cast and a credit to the show. 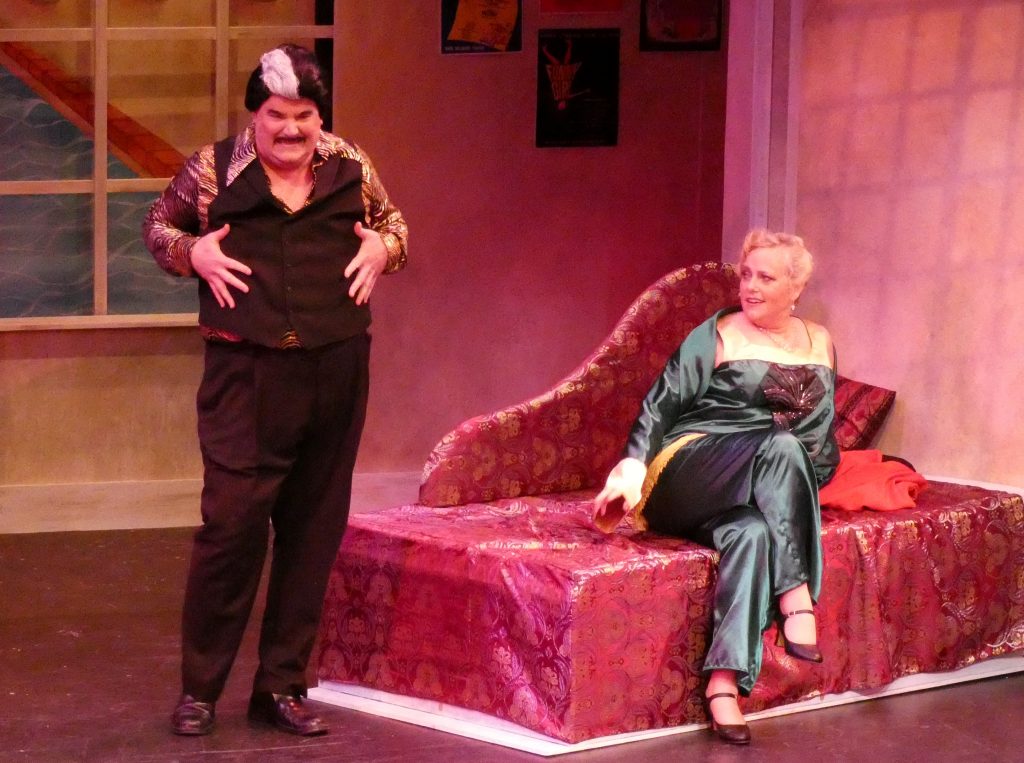 John B. Cooper as “Adolpho” and Nancy Hebert Bach in the titular role in TMP’s “Drowsy Chaperone.” Photo by Kat Dollarhide.

Three other members of the supporting cast deserve special mention. John Miller’s Feldzieg is great. He connives with Adolpho and plays off of Sam Barker and Peter Knickerbocker’s gangsters to great effect. Kudos to Miller, Barker, and Knickerbocker for helping carry a fine show.

Each of these named performances were good, but the quality of this show is in the total being better than the sum of the parts. The performers were excellent, but the casting selections made it even better.

Could it have been better? There were a few flat notes and at least one missed dance step, but those will be fixed by this coming weekend. But, Drama in the Hood would like to make one key suggestion. There is a line, early on, about a “craving” for a younger Ronnie Howard in “Music Man.” Ron Howard was six years old in that movie. That hit the ear and the stomach uncomfortably.

“Drowsy Chaperone” is a sweet spot show for TMP, and it will likely sell out. So, make your plans early. It is a really good show, but it is this cast that makes it an event to see.