Everything is evolving and revolving at the Seattle Opera

The world of consumable media is rife with stories of the man, the myth the legend that is Steve Jobs. Numerous books and movies have tried to make sense of this complicated genius. It wasn’t until viewing Seattle Opera’s latest production, The (R)evolution of Steve Jobs that it became clear – the only medium that can fully capture the spectrum and spectacle of this complex figure is music and, more specifically, opera.

Steve Jobs is a character tailor made for opera. He has the confidence, gravitas, and ego of a Figaro and the maniacal cruelty of Scarpia. As the title suggests, this tale is both the revolution and evolution of Jobs as tech sensation, a lover, a friend , a tyrant, and, in the end, just a human. The opera begins with a young Steve and his father who has built him a work table. This beautiful, simple gift will live and serve in the garage that will become the birthplace of the Apple empire. We quickly flashforward to 2007 and the adult Jobs triumphantly presenting the first iPhone while simultaneously being forced to face his declining health as well as his mortality. In his mind, he turns to his former (deceased) spiritual advisor Kōbun Chino Otogawa who serves as a guide, connecting the dots of his life, revisiting the trials and triumphs of his work and his relationships – both of which swung extremely high and incredibly low. Jobs’s ego and temper constantly get in the way of success both personally and professionally and the more vulnerable he feels, the more he pulls away from the people in his life. 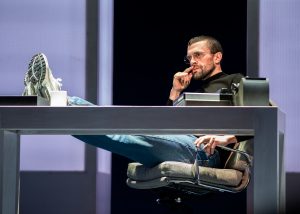 The structure of the story is not linear but circular with a fractured timeline that follows an emotional journey rather than a chronological one. The symbol of the circle is repeated throughout the piece – not only as a framework for storytelling but also in the ensō – a round, ritually drawn character important in Buddhism and a meaningful practice in Jobs’s life. The circle also turns up as Jobs is designing and inventing. He is always insisting everything be simple, and round. The phrase “one button” is repeated many times throughout the opera. 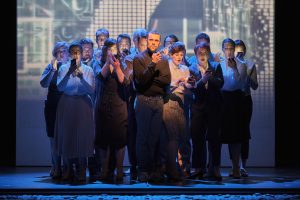 When approaching a piece with such an infamous figure who also happens to occupy the stage for most of the show, one needs a practically herculean performer. Onstage at McCaw Hall, this bar is cleared with room to spare. John Moore as the titular Steve Jobs is truly spectacular. His range is extensive both vocally and emotionally. He is able to delve into the depths of the character and be totally present in every moment while never letting the vocal line be anything less than dazzling. 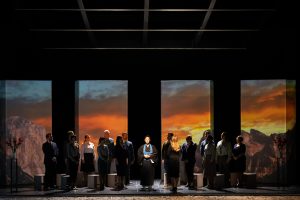 While Moore must shoulder the lion’s share of the work on stage, the bench in this production is deep. As Paul Jobs, father to Steve, Morgan Smith is earthy and grounded and the perfect antithesis to the tech mogul his son will become. Adam Lau as Kōbun Chino Otogawa has a wonderful, rich, and clear bass sound and his comedic timing is spot on. Madison Leonard has an easy, soaring soprano and is charming and vulnerable as Jobs’s former lover Chrisann Brennan. In the role of Jobs’s long time partner Steve Wozniak is the engaging Garrett Sorenson. Sorenson and Moore have a great chemistry together and it is heartbreaking to see their friendship disintegrate. Finally, there is the stunning Emily Fons as Laurene Powell Jobs, Steve’s wife and confidant. Fons is captivating every moment she inhabits the stage. She has an incredibly powerful instrument and the relationship she and Moore have built onstage is layered and exemplary. The character of Laurene has been flushed out a bit since the first production of the opera and Fons has extracted every ounce of marrow possible and leaves it all out on the stage. 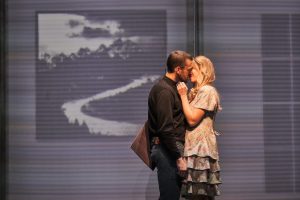 There are many elements that are used to tell this complicated and ambitious story. Set designer Vita Tzykun and Video Designer Benjamin Pearcy with 59 Productions have created a malleable and ethereal environment that can be at one moment a de facto Apple Store and immediately become an idyllic picnic spot which then morphs into an expressionist version of the inside of a computer. Choreographer Chloe Treat makes swiping on a phone look elegant and graceful. The orchestra, under the capable baton of Nicole Paiement, executes flawlessly the challenging and progressive score by Mason Bates. 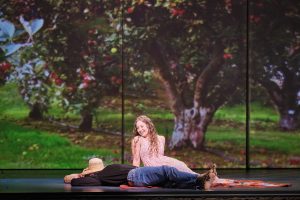 Seattle Opera has produced this opera in tandem with The Santa Fe Opera, San Francisco Opera, and the Indiana University Jacobs School of Music. In the few places where this opera has been seen, the audience responses have been overwhelming and it is easy to see why. Not only is the score inventive and exciting, the libretto is intricate and superb, but it touches on themes around technology and life that affect everyone on a daily basis. In the end, we are all encouraged to “look up. Look out. Look around.” 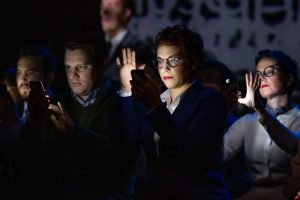 Melissa Plagemann with other members of the Seattle Opera Chorus in The (R)evolution of Steve Jobs.
Philip Newton photo

The (R)evolution of Steve Jobs is playing at Marion Oliver McCaw Hall through March 9th, 2019 in English with English captions. For tickets and more information, please visit https://www.seattleopera.org/tickets/.