Tony Kushner’s “Angels in America” was never supposed to be a comprehensive work on the worldwide AIDS crisis. Instead, it was a snapshot in time of the crisis, contextualized by the political climate of the day. As such, it is the best vehicle we have for remembering the past and learning for the future. This weekend, Lakewood Playhouse tackled the play, presenting parts one and two of Kushner’s signature work. All in all, nearly seven hours in length, the show is a tour de force effort by all involved. Drama in the Hood was there Sunday to see both halves in one sitting, and it was an honor to see this company work.

“All-Star cast.” That’s an overworked term, usually meaning “a bunch of people you vaguely recognize.” Not so in this case. “Angels in America,” as realized by Director John Munn is one star after another, showing the audience what inhabiting a character is all about. Who is “the lead?” That was a topic of passionate discussion during the 90-minute break between Parts One and Two. Is it the sick kid who is the fulcrum of the story? Is it the guy with more lines than anyone else? The tormented husband who haunts the shadows of the night? It’s a show with many leads. It’s a show without a lead. “Angels in America takes the audience in its many hands and leads you on a journey that you will not soon forget.

Kenyon Meleney plays Prior Walter, as well as Man in the Park. (Everyone in the show plays multiple roles.) Prior Walter finds himself afflicted with AIDS and abandoned by the love of his life. His anguish at the latter and brave battle against the former provide the framing for the show. Mr. Meleney is wildly talented and an excellent addition to what is becoming the deep talent pool enjoyed by South Sound theater. There has never been a better time to be a theaterphile in this town and actors such as Kenyon Meleney make it so. Bravo, sir!

Louis is the man who couldn’t stand by his man as his man fought AIDS. Jason Quisenberry plays Louis, and plays the hell out of the role! Mr. Quisenberry was lauded for Changing Scene Theatre Northwest’s “Bent” last season, but he’s miles better as Louis. This fine young actor takes Louis on a roller coaster journey of 1,000,000 miles and the audience rides the coaster alongside. Louis is game, but weak. Jason Quisenberry’s strength as an actor is finding Louis’ darker corners and exploiting them to perfection.

Everyone is tormented, to one degree or another, in this show. Goodness knows, the country was tormented by conflicting influences. We had this horrific plague visited upon us. On the other hand, the evangelical Morning in America espoused by President Reagan was smug, nationalistic, and tone-deaf. It is little wonder that there were real life examples of Joe Pitt everywhere. Joe Regelbrugge plays Mr. Pitt in this show.  A happily married WASP to the world, Pitt is asked over the course of this show to find his real self. The task is messy, and the outcome for Joe is unsure, even at the end. But, Joe the actor shows his inner sinew to the audience and we are mesmerized by him.

Sane-Adjacent. That’s a made-up word, made up by me on the drive home from the show. Not everyone can play sane-adjacent, but Shannon Burch plays it better than anyone we have ever seen in community theater. Harper Pitt tries so hard to keep it together, but the dreams and visions get in the way. To portray Harper properly, Ms. Burch uses her entire body. Her fingers writhe and her shoulders hunch against the pressures of living. Later, when Harper gets a chance to stand tall, Ms. Burch emerges from her cocoon a full-on butterfly. Shannon Burch makes every role she takes on, her own. What greater stage skill is there than that?

W. Scott Pinkston plays Roy Cohn, the show’s only real-life historical figure. A henchman under one GOP bad actor after another, Cohn prosecuted with a cleaver. He used it, in particular, against the homosexual community, all the while living a gay double life. While Cohn may have been a bad actor, Mr. Pinkston is, quite simply, a great actor! His Cohn is defiant to the end, only chastened in his final few moments on Earth. There is a lot of meat on the bone in the character of Roy Cohn, and Scott Pinkston filets it for the audience to see. 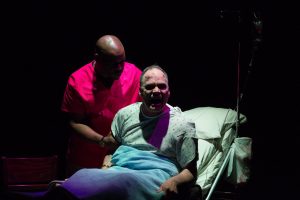 Jennifer Niehaus-Rivers plays Hannah Pitt. It isn’t the biggest role in the show, but the character is rich in ore and Ms. Niehaus-Rivers mines the ore beautifully. Out of her depth in New York City, the Latter Day Saint finds nuance in a world she thought was black and white.

Erik Hill has one of the great program bios in recent memory, but his work on stage is more impressive yet. He delivers not one, but two, monologues flawlessly and does a fine job supporting some of the few comedic moments in the show.

There are entrances and then there are entrances! Rachel Wilkie makes her angelic entrance to this show in the most impressive way possible. Ms. Wilkie’s stage presence is palpable every time she appears and she is an invaluable addition to the cast.

In the last several years Ton L. Williams has established himself as an actor of many talents. From Avenue Q to Rocky Horror, his contributions have been wildly applauded. This, though, may be his finest hour. (We told you it was all-star.) As Belize, Mr. Williams is flamboyant without being a caricature. As Roy Cohn’s nurse, he is multi-dimensional. Perhaps Ton Williams best moments in “Angels in America” were as the nurse in search of spiritual closure.

Though the many talents of the cast are worth the price of admission, there’s still more. Mark Thomason’s lighting is superb! Such lighting effects and shading have not been seen at Lakewood Playhouse in its storied history. Why is this so important? Because the nuance of light and dark is an actual theme in “Angels in America.” If you have been to LPH before, but not recently, come to this show and give yourself to the light. 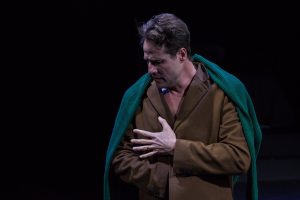 Were there any glitches? It would be hard to put on seven hours of theater and not have one or two moments. We caught one bobbled line, but we aren’t going to name the actor. He had, literally, hundreds of pages of script, and knows to correct the one bobble. Finally, the voiceover mispronounces “Bol-she-vik,” as “Bosh-le-vik.” That’s an easy fix.

Should everyone see this show? It is certainly important enough to be for everyone. That said, the subject matter is extremely mature to the point of graphic. Language isn’t the issue, because kids hear at school more than we want to believe. However, the youngest among us don’t need to be exposed to the grunting and straining of underpass sex, no matter the orientation of the grunters and strainers.

For 16 years of age and up, though, absolutely see this show. Some theater should be seen for its entertainment value. Some, though, should be seen because the subject matter is important and the cast is so incredible as to make not seeing the show punishable by jail time. That’s how strongly we feel about “Angels in America: Parts One and Two.” Buy your tickets today, and let us, together, fill Lakewood Playhouse for this landmark theater event!

Now, should you see the two parts together, an option that is only available on Sundays? There are mixed reviews on that, but it is the most immersive way to see “Angels in America.”. For that reason, we cannot recommend against the marathon option.