Sir Arthur Conan Doyle wrote, “That which is clearly known hath less terror than that which is but hinted at and guessed.” Horror has, for centuries, relied on this as a principle in order to scare the living daylights out of an audience. Henry James and Benjamin Britten are no different.

James’s 1898 novella The Turn of the Screw is chillingly ambiguous and thus has inspired many different interpretations and conclusions about the exact nature of the evil depicted in its villain (or villains). Composer Britten, along with the libretto writer Myfanwy Piper, created a chamber opera which stayed true to the enigmatic nature of James’s story and that takes its place among the scariest of ghost stories.

The Turn of the Screw tells the story of an unnamed governess charged with the care of two young, orphaned children. Their uncle and guardian (an entirely unseen character) has given the Governess explicit instructions not to contact him. As she rides out to Bly, the country house where the children live, she muses naively to herself, “I have nothing to fear. What could go wrong?” Upon arrival she is introduced to the young children, Flora and Miles and the housekeeper Mrs. Grose. All is idyllic as the two women go on about how wonderful the children are and Flora and Miles skip off to show the Governess around Bly. It is not long, however, before we see the first signs of trouble. A letter arrives informing them that Miles, the young boy, has been expelled from school for violent behavior. Like in any good horror story, though, this is easily dismissed and both women vow to think no more of it.

Some time later, the Governess is lounging peacefully on the grounds of Bly. She wonders why she ever worried at all. So what if she hears cries in the night or footsteps outside her door? Suddenly, a strange figure appears in the window only to vanish almost immediately. When the Governess describes the man to Mrs. Grose, he is identified as Peter Quint, the deceased valet of the master of the house who had a troubling history with both Miles and the (also dead) former governess Miss Jessel.

Both Miss Jessel and Peter Quint appear intermittently trying to connect with or assert influence over Flora and Miles respectively. The Governess attempts to intervene and defend the children but is deterred when Mrs. Grose along with Miles and Flora refuse to acknowledge the existence of the spirits. Things spiral further and further out of control as both the characters and the audience alike become less sure of what is real. 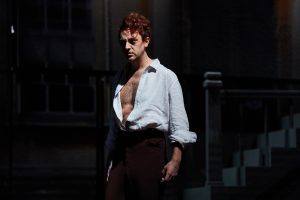 With a cast of only six, there can be no weak link and with this incredible group of musicians, there really isn’t. As the Governess, Elizabeth Caballero drives the bulk of the action and has the biggest arc as a character and she is more than up for the challenge. Her soprano is soaring and effortless. Though, in the most dramatic moments, Caballero is not afraid to have the emotion take over and to let the extreme distress of the character show in her voice. Returning to the Seattle stage is Ben Bliss as the “dreadful” Peter Quint. His tenor voice is sweet and dynamic and one could easily get lost in its beauty. His performance is so powerful though, that the audience is always reminded of his lecherous and libidinous tendencies. 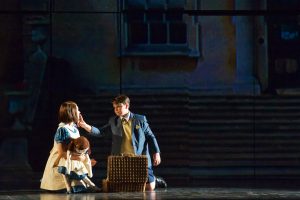 In roles of the child victims are Soraya Mafi as Flora and Rafi Bellamy Plaice as Miles (sung on alternate performances by Forrest Wu). Mafi, on top of performing the role beautifully and blending flawlessly with a boy soprano, has the added difficulty of playing a child alongside an actual young person. Her physicality is subtle and entirely convincing. In an opera written as a sort of love letter to the young, treble voice, Plaice shone with a wonderfully clear, innocent, and perfectly angelic tone.  As concerned housekeeper Mrs. Grose, Maria Zifchak is charismatic and her tone is lovely and warm. Marcy Stonikas rounds out this incredibly talented cast, with a rich and vibrant soprano, as the eerie Miss Jessel. 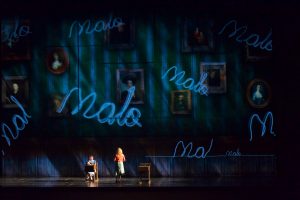 Stage Director Peter Kazaras is no stranger to Britten or this opera as he played Quint in Seattle Opera’s first production of The Turn of the Screw in 1994. He clearly knows how to maximize the drama and terror of this piece. The brilliant scenic design by Robert Dahlstrom and lighting design by Connie Yun bring to life the stage as a character unto itself. It is constantly changing and transforming adding a dreamlike uncertainty to every scene.

In speaking about his novella, Henry James said, “Only make the reader’s general vision of evil intense enough and his own experience, his own imagination, his own sympathy . . . and horror . . . will supply him quite sufficiently with all the particulars.” Kazaras (with the help of Conductor Constantin Trinks and his small but mighty orchestra) has expertly brought to life Henry James’s vision.