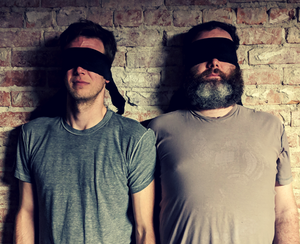 A play of mine called Hostages, written almost thirty years ago … I’m curious to see how it stands up after all these years…….Yussef El Guindi

Hostages, by Yussef El Guindi, which opened this weekend at 18th and Union is only tangentially about the political situation in the Middle East, the essence of Hostages is the relationship between two individuals, who do not like each other, stuck in an isolated situation for an unbearably long period of time.

It could have been written yesterday to remind us that even though the initial perpetrators of the current Middle East crisis, the two Bush presidents, have been out of office for a long time, presidents Clinton, Obama and the 45th have all been unable to create peace and stop the bombing of innocent civilians.

But, it also could have been written 100 years ago during the Russian civil war, about an aristocrat and a liberal democrat being imprisoned by the Bolsheviks, or 72 years ago when disgraced ex-concentration camp commandant Nazis were imprisoned with generals involved in the Stauffenberg plot to assassinate Hitler, because the play spoke about universal human emotions. I predict that this play will be just as relevant in 500 years as Shakespeare is today.

As the play opens two blind folded early middle aged men are chained to an old-fashioned steam radiator in an otherwise empty room. One of them, Meadows, played by Nik Donner, talks nervously, the other Ted, played by Sam Hagen, is more reticent. Both have beards and are wearing dirty clothes. Meadows, played by Nik Doner, has just been given an accommodation upgrade, from a broom closet where he could not stretch his legs.

Kidnapped by terrorists, both are college professors, who had been teaching at a foreign university presumably in the Middle East. The starkly different personalities of the two are revealed; Meadows wallows in self-pity, narcissism and is clearly on the edge. Ted is detached and accepts his fate with stoical reserve because he is an idealistic Middle Eastern political scientist, thinks globally, and has abstract sympathy with the terrorists. However, his compassion only extends to collective groups; he has no compassion for his companion, and is no Dietrich Bonhoeffer extending help to those of weaker character.

While the relentless bombings continue, the days and months go by, they get released from their chains, only to bicker incessantly and mercilessly judge each other. Through the dialogue the playwright’s skill is revealed; the dialogue is incredibly witty and full of gallows humor, yet psychological insights abound about the two as well as discussions about whether individuals bear responsibilities for the decisions of their governments. 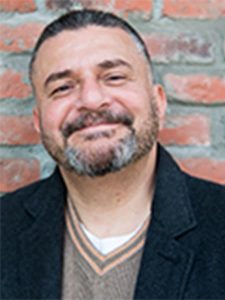 The outside world enters their conversation, when an angry guard reveals that his sister and her family have just been killed by a random U.S. bomb. The guard’s reaction reveals to the hostages how an ordinary individual, experiencing intense emotional pain, directs his pain into hatred of the collective entity responsible it and then directs his hatred at the individuals representing that collective this scene.

Although there is very little “action,” due to the excellent script, David Gassner’s superb direction, the menacing sound and lighting effects by Evan Mosher and Angelo Dometri respectively, and of course the outstanding acting of Nike Doner and Sam Hagen, in extremely demanding roles, this play was highly watchable despite the subject matter. Although I never, at any point, felt that the author was ever trying to make a point, it was enlightening without being didactic.