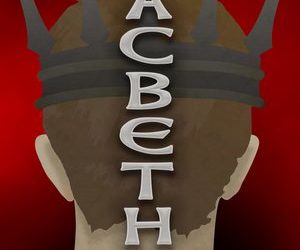 Tacoma Little Theatre’s 99th season of shows has been one of its best in recent memory, as the comedies have been crisp and the dramas on point. This weekend, TLT opened the final show of the year with “Macbeth.” The Shakespearean tragedy (aka “The Scottish play”) is an absolute actor’s showcase, highlighting the wealth of talent in the South Sound. Theater-goers who heard that the legendary pug Bujeaud was going to helm this show made plans early to attend a performance. They were not to be disappointed, because the production values are outstanding and the acting was superb. Ms. Bujeaud has another feather in her Director’s cap. 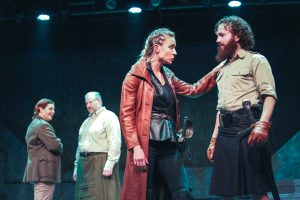 Playing the titular heir to the throne of Scotland with more impatience than sense is Dylan Twiner in his debut performance on this stage. Whenever he returns he will be remembered for his fine star turn in this show. By turns ambitious, preening, lusty, angry, and sorrowful, Mr. Twiner plays them all with a verve for the role. He displays a real touch for Bard’s distinctive rhythm and puts forth an excellent effort throughout.

Did we mention lusty? Twiner’s co-lead and the woman with the most famous stained hands in Shakespeare lore is Kathryn Philbrook. My goodness, do these two create stage smoke! Near intermission, Mac and wife are making out (Drama in the Hood knows kissing and we know making out. This was the latter.) in the foreground while mayhem was taking place behind them. It was the most effective scene in the show, and one of the most effective scenes in South Sound theater this year. But, apart from getting her lust on, Ms. Philbrook is great as the conniving wife urging treachery. When a scene the audience knows is coming turns out to be this effective, the actor is doing the role justice. Such was the case in the “out, out, damned spot” moment. Kathryn Philbrook plays the hell out of Lady Macbeth and deserves the ovation she received.

The cast is large and space doesn’t allow us to mention every good role in the show, but Jessica Weaver as Banquo did a fine night’s work. Banquo is many things in a relatively short amount of time on stage. Ms. Weaver performed every nuance with skill and grace. She moves about the stage with purpose, and that is important in playing this role effectively.

Life is three things. 1) Frequent instances of the mundane, 2) Occasional joy and 3) Periodic heartache. Rodman Bolek’s MacDuff experiences heartache and he brings every person in the audience into his despair with him. Mr. Bolek did a comedic turn on this stage in The Fox on the Fairway and a dramatic turn in The Great Gatsby. MacDuff, however, is his finest hour on the Tacoma Little Theatre stage.

Jacob Tice is a critical South Sound favorite and he only burnishes his reputation with his portrayal of Malcolm in this show. His God-given sonorous voice and his impressive stage ability serve him well. He exudes authority with his every word and is one of the player’s to whom eyes are drawn, even when the stage is crowded with action, bodies, and blood.

We cannot close our review of “Macbeth” without a nod to young Caleb Corpeno, playing MacDuff’s son. He’s just a second-grader, but this young sir handles the difficult dialog he is given with an aplomb worthy of someone twice his age. This isn’t his first time on the TLT stage and if there is a God who manages show casting it will not be his last. Bravo, Mr. Corpeno! Your performance was noted and appreciated.

Traditionally, this is the time to point out mistakes, gaffes, and flubs. There was none of note and it would be needlessly picky of us to call out one actor for one dropped line when it is Shakespeare, for heaven’s sake. This is especially true since we have already applauded his effort. He will nail the line next time, for sure.

Tacoma Little Theatre is already looking forward to its 100th season of shows, so they could be forgiven if they mailed in the final show of this year. They did not! As the first of two South Sound stages to put on Shakespeare in the next two months this show gives Romeo and Juliet at the Bloedel Reserve something to shoot at. It is a great night out, highly recommended. Anon, go henceforth. Do not tarry, for the 17th of June will be presently upon us.

MacBeth-The Definitive Production
May 9, 2017
© 2021 Drama in the Hood. All rights reserved.
Site Design