It is fun to look back at the way things were in the middle of the last century. The fashions we wore, the words we said (“Swell”), even the music to which we listened. They hearken to days gone by that will never be seen again. In one way, that is “The Pajama Game.” However, hidden inside this play are themes that have been around from the beginning of time, and yet ring true today. Love (natch) and the struggle of the working person who is just scraping by, juxtaposed against the one-percenter. Centerstage Theatre in Federal Way opened “The Pajama Game” this weekend. A strong cast, under the deft direction of Trista Duval, made it a treat for the appreciative audiences. Drama in the Hood was there Sunday afternoon.

The curtain draws open to reveal a factory, circa 1955. Hard-working salt of the Earth type folks make high-quality night clothing in this factory. It is a precision operation. The workers appear to be happy in their jobs, but less than happy with their wages (We told you it was current.) Do they deserve more money? Or, are they ungrateful stiffs who should be happy making less than a buck an hour? What will the garment workers union have to say about the matter?

Shop steward Babe Williams isn’t going to lay down for management! Believe you, her! Babe is a tough negotiator with the might of right on her side! But, she also has heart swoon for Sid Sorokin, and he’s management. Babe and the employees want a 7.5 cent raise. The bosses want to keep all the money for themselves. Alas, how can love ever flourish in this barren landscape of disparate goals?

Taylor Davis plays Babe Williams in a way to make the audience want to stand and sing “Look for the union label.” She is an outstanding actress, and a fine singer, as well. Her plucky Babe is extremely well-played and displays some serious stage chemistry with Sid.

Sid is caught betwixt and between the union and management. He wants nothing more than for there to be labor peace. Is that because he’s all about the business of business? Not even. You see, as long as the union and management are at odds, so too are Sid and Babe, and they are falling in love too hard and fast for labor strife to slow them down. Eric Dobson is Sid. Blessed with one of the finest male singing voices in the South Sound, Mr. Dobson throws heart and soul into the role. He’s a major reason this show works as well as it does.

“He’s such a dog.” That’s what one audience member said about “Prez,” played by Sam Barker. Director Duval and Mr. Barker chose to portray Prez as a near-caricature of what used to be called “a man on the make.” Sniffing after every skirt in the company, Prez would be a #metoo waiting to happen today. Sam Barker plays the part very well and has some agile dance moves.

South Sound audiences are watching a star in the making in Ashley Koon. Her career is on an upward trajectory from Laker Girl through Lady Larkin to Gladys Hotchkiss in this show. At every stop, she shows new and improved talent. Gladys can whip out a pair of jammies with the best of them. Then, she can sing and dance to “Steam Heat” after work. Ms. Koon is up to the job.

Colin Madison plays Efficiency Manager Vernon Hines, with time out at the beginning and end to be the ostensible show narrator. Hines is nervous, and Mr. Madison fairly quivers under Hines’ nerves. He is an important cog in the machine’s gears and does a really fine job.

The Pajama Game is an ensemble piece in the finest stage tradition. While room doesn’t allow us to single out every good performance, a nod is necessary to a few members of the ensemble who stepped up. Among these are Caiti Burke as Mabel, Jenna McRill as Poopsie, and Cassie Jo Fastabend as Charlie. All were great in this show.

Centerstage Theatre’s value to the Federal Way community in particular, and to the family of South Sound theaters, in general, is great indeed. Quality people, putting on this kind of production is something that would leave a gaping hole in the local psyche if it wasn’t around anymore. 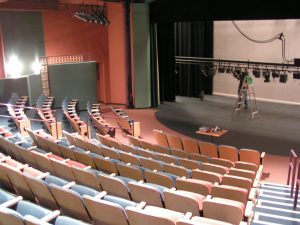 Oh, Centerstage will be around next year, in one form or another, but sadly its future beyond next year is in jeopardy. Like in so many other places, civic budget crunches are eroding the support Centerstage needs. One can say, “But, what about the art,” only to be shouted down by the bean counters in local government. That’s why the artistic community so needs the tangible support of those who care about this kind of thing. To that end, Centerstage is hosting a gala event, June 8, at 7 pm. For a reasonable price, patrons get a chance to see some of the local talents in action, share in some libations and heavy hors d’oeuvre, and rub shoulders with this talented sector of the community in which we live. It will be fun, but moreover supporting community theater is the right thing to do.

See the theater website, or call 253-661-1444 for more information about the gala, or to provide any other kind of tangible encouragement to a theater that has been operating for 40 years. May it be around for 40 more!

Saturday, May 26 is a special night in the run of “The Pajama Game.” That night, attendees are encouraged to show up in their own pajamas. A picture of THAT audience would be worth a spot on the lobby walls.