It was a trip, it was a ball with the Edmonds Driftwood Players in Dirty Rotten Scoundrels

It’s a tale as old as time. Boy meets girl. Boy cons girl out of millions of dollars by pretending to be a prince leading a fake resistance. Boy loses girl. Boy gets saddled with a younger, doofy protégé. Hilarity ensues. OK, so maybe it’s not a tale as old as time but it is the tale that is the basis of the raucous musical Dirty Rotten Scoundrels being presented by the Edmonds Driftwood Players.

Even before the show proper, the audience is treated to the perfect curtain speech replete with sarcastic, self-deprecating jokes, references, and some very strict cell phone rules. It succeeds in setting the stage for a musical with as many jokes per square inch as a Monty Python sketch. The story begins at a lavish party where we witness the suave and debonair Lawrence Jameson  wooing his way through the rich women of the French Riviera with the help of his trusty sidekick (and on-the-take cop) Andre Thibault. After a successful night of securing funding to aid his phony resistance, Lawrence meets up with Freddy Benson – a less successful, less sophisticated, cruder version of a con man. The two men spend equal time as teammates and adversaries as they orbit the effervescent and ever-optimistic Christine Colgate.

Jeffrey Lane (book) and David Yazbek (music and lyrics) have created an incredibly charming show that will do whatever it takes to get the laugh. They come at you from all directions with clever word-play, innuendo, straight up vulgarity, and any other arrow in their vast and varied comedy quiver. In order for the show to not become merely a 2 ½ hour joke machine, it requires a cast that can deliver honest, grounded performances and this production has that in spades. Jay Vilhauer as the dashing Lawrence Jameson gives a beautifully understated performance in a role that can so easily go over the top. Then there is Gabriel Ponce as Freddy Benson playing the rumpled ying to Vilhauer’s elegant yang. The character of Freddy seems to stumble his way through the show randomly landing on good fortune and it would be easy to assume the performance is just as accidental. Ponce, however, extremely deliberate and specific in his portrayal along with a devastating mastery of comic timing. Rounding out our triangle of leading players, is Andee Albert as the irrepressibly hopeful Christina Colgate. Albert is everything one could want in an ingenue – sparkling and effortless vocals, crackerjack dance moves, and an open (if somewhat overly manic) spirit and a genuine goodness emanating from every pore.

While this trio is the fulcrum around which this show turns, the world is filled out with an array of colorful and engaging characters. Not the least of which is the magnetic Will Halsey in his turn as the buttoned up Andre Thibault. He has a great chemistry with Vilhauer (though I dare you to find anyone on stage with whom Halsey does not have chemistry). Opposite Halsey is Kate Kingery as Muriel Banks. The two of them are responsible for some of the rare moments of sweet sincerity which are an oasis amongst all of the bombast. Lastly in the bit part of Jolene is Katie Gary delivering some stellar vocals along with one of my favorite lyrics in the show which rhymes melanoma with Oklahoma.

It should also be mentioned that the chorus is this show is relatively small (about 10 people) but they are used so effectively by Choreographer Elizabeth Posluns they seem much larger and their vocals are challenging and jazzy and, thanks to Music Director Mark Press, perfectly executed. Overall, Director Dan Posluns has made such efficient use of the space and his cast it seems as though both the stage (along with the beautiful set designed by Brian Lechner) and ensemble are larger and on a much grander scale. There is not a corner of the stage or a moment in the show wasted. It was a delightful night spent with those “filthy, shameless, lyin’, cheatin’, dirty rotten guys”. 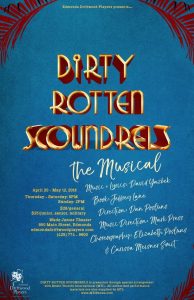