When Mark Twain wrote “The Adventures of Tom Sawyer” he did it that his generation wouldn’t forget what life had been like when he was young. Twain hearkened back to a gentler time in his seminal work about two boys, treasure, and budding romance. Now, a century and a half later, Twain and his rich, evocative work are fading out of sight. His books aren’t taught in schools anymore, a victim of time and a slowly evolving understanding of the casual racism of Twain’s youth. Therefore, it isn’t a stretch to say that Gig Harbor’s Paradise Theatre does a solid for theater lovers in the South Sound by bringing “The Adventures of Tom Sawyer” to the stage. Directed by Rikki Jo Hickey, the production hits all of the expected notes but also reveals some deeper meaning.

Cole Mitchell plays Tom. Mr. Mitchell’s show bio indicates he is a young man with a plan! Tom had plans and lots of them. Some of them skirted the edges of acceptable behavior, but Tom Sawyer never minded walking that line. Cole Mitchell portrays the young Sawyer with a deft touch. There is an innocence to his interpretation that resonates throughout the production. When Mr. Mitchell rolls his pant legs up he could have been the young man watching the mighty Mississippi rolling through his town. One small piece of advice, however. In spite of its location Illinois adjacent, Missouri presents as a southern state. The folks there speak with a soft drawl as if the humidity prevents them from arriving at the end of sentences any too quickly. Both of the young leads would do well to slooowwwww down a little.

Both leads? But, of course, there can be no Tom Sawyer without Huckleberry Finn. In this show, Dante True doubles down on his excellent performance as Snoopy in “You’re a Good Man, Charlie Brown,” returning to the same stage to be Huck Finn. Mr. True is building a resume’ that says he is a keeper. Some actors draw the audience’s eye to them, even while standing on a group. Dante True is that kind of performer. His Huckleberry Finn kicked off the shackles of polite society long ago, and never looked back. Dante True understands his character’s motivation to be his own man, even though he isn’t yet old enough to be called “a man.” Theater-goers enjoy watching Huck Finn navigate his life, but moreover, they are enjoying Dante True navigate the early days of what can be a long career.

Stage chemistry is hard to define, but one knows it when one sees it. Cole Mitchell and Dante True have real chemistry from the show’s earliest moments when they try to figure out the best way to cure warts. Of course, the answer involves a dead cat. Everyone knows that.

Ah, Becky Thatcher. The very name brings a swoon to young romantics, who can only dream of hearing, “Oh {fill in your name}, how could you be so noble?” Who among us wouldn’t take a round of corporal punishment to hear those words from the girl of our dreams? Jaquelin Westeren plays Becky and plays her with great stage skill. There is an overarching innocence to Becky Thatcher, even as she is exasperated by Tom. Miss Westeren plays swoony coquette and a foot-stomping adolescent girl with equal ability. She does a fine job. Jaqi is training in the art of stage management. That’s fine, as long as it adds to her theater cred, but one hopes it isn’t the beginning of the end of her on-stage career. She’s gifted as a performer.

Eli Ghorley is one of this theater’s Most Valuable Players. In this show, he’s a triple threat, playing three different parts, namely the Minister, Master Dobins (the schoolteacher) and Injun Joe. He’s excellent in all three but is perhaps most effective as the clergyman. Drawing on his observations of  Southern Baptist stemwinders Mr. Ghorley could have made some bank if he had taken up an offering after the show. His Injun Joe is good, though the stage script gives Joe a little less to do than Twain’s book gave him.

Ghorley’s, and Director Hickey’s, choice of how to play the schoolteacher was an interesting one. Twain wrote Master Dobins as at his wit’s end where Tom Sawyer was concerned. Eli Ghorley plays him with a sadistic streak, enjoying whaling Tom with a yardstick. It isn’t a bad choice, but it casts a different light on Tom’s desire to skip school and smoke pipes with Huck Finn. Who wouldn’t skip school if the other choice was being smacked around by someone who enjoyed doing so? Eli Ghorley’s schoolmaster’s gait brings to mind Burgess Meredith from Batman. It really needs to be seen to be believed.

Donna Long’s Aunt Polly was well-played, even through a couple of dropped lines. She was best in her grief over what she believed was the demise of her nephew. That part of the show was the most moving and Ms. Long’s role in it was effective. 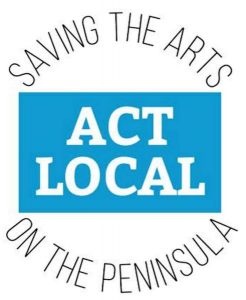 Paradise Theatre never fails to amaze in the area of set construction. This is not a large stage, but the efficient use of the space they have, along with clever rear-stage projection makes it look much larger than it is. One wonders what this crew can do when Paradise moves into bigger digs. Their Act Local fundraising campaign is a worthy cause if for nothing else than to let Jeff Richards have more room to play. Amy Knickerbocker’s costumes were true to the era and an important reason why this show works. Kudos to the crew!

Mark Twain was a national treasure throughout his life. He was a humorist, author, newspaperman, and intrepid world traveler. This show is a regional treasure, well worth the time it takes to drive to Gig Harbor and the price of admission. It touches on the surface of Twain’s work, but also a genuine spiritual seeking that Twain displayed throughout his life. The care the cast has for the material is evident. Paradise Theatre is a favorite of Drama in the Hood’s. Well crafted shows put on by folks who care about quality.

‘Barefoot in the Park’ a Classic New Year Show for Paradise
January 16, 2020
© 2021 Drama in the Hood. All rights reserved.
Site Design