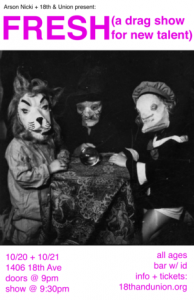 A night of up-and-coming drag royalty strutting onto the Seattle drag scene.
“Fresh,” a non-competitive drag show hosted and curated by drag queen Arson Nicki, lit up the stage of Seattle’s 18th & Union theater on Friday and Saturday night with stunning displays of costume designs, dance, and proud sexuality.
“Fresh” calls itself “a celebration of the present & future of Seattle queerdom,” and boy oh boy did they deliver. Whether you’ve been watching “RuPaul’s Drag Race” since it aired, or you still think a drag race is only for cars, “Fresh” will knock your socks, stockings, or fishnets right off.
Drag king Nicolai D’Lacey kicked the show off with a sultry yet studly routine set to the Styx’s classic hit, “Renegade,” stripping down with the confidence of a seasoned drag performer. D’Lacey is too young to compete in most official drag shows, which is something that makes “Fresh” all that more special; living up to its motto of inclusivity, the show allows younger drag performers to gain experience and recognition before being pushed into the deep end of the proverbial drag pool.
Next came Kitty Glitter, truly embodying the name, with a face covered entirely in purple glitter and flowers covering hair and beard. They worked the small but enthusiastic crowd with a mixture of strip teasing, lip-syncing, and twerking that had dollar bills flying this way and that.
Drag-monster Terrie Belle, dressed in an orange jumpsuit with fantastically outlandish corpse makeup (complete with a dead eye) had the audience in stitches with a spot-on lip-sync to Taylor Swift’s “I Knew You Were Trouble” interspersed with dialogue from Charlize Theron’s sex worker-turned-serial killer Aileen Wuornos. The chilling combination shone a new light on both pieces for me, and made for a darkly hilarious performance.
The queen Xtrosity closed down the end of the first act with a sensual dance featuring delightfully contoured cheekbones and a flapper-esque skirt made from “the finest textiles of Home Depot.”
In lieu of an intermission, emcee Arson Nicki performed “20 Something” in a vintage wedding dress, giving the audience a bit of a respite before Nicolai D’Lacey returned to thunderous applause for a performance drenched in the type of fierce defiance drag queens are known for. Sporting a rainbow bandana and a rainbow flag with the Black Lives Matter clenched fist, they drew cheers and screams, as well as a speech from Arson Nicki as they departed that lauded D’Lacey’s courage and reaffirmed commitment to the fight for acceptance and equality.
Kitty Glitter, Terrie Bell, and Xtrosity all returned for their second performances, ending in a stunning routine by Xtrosity, lit only by a hand-held strobe light. The final effect was like a haunted house crossed with a dance club, the perfect aesthetic ending to a night of thundering music and stunning visuals.
Although these performers were only booked for the one night, “Fresh” will be returning to 18th & Union in a few months with new performers, and I recommend everyone take the time for a fun-filled night and the chance to participate in the beginning of some highly promising careers.
Fresh, hosted by Arson Nicki. 18th & Union Theater, 1406 18th Ave, Seattle, WA 98122. Fri-Sat Oct. 20, 21. Info: https://18thandunion.org/home or (206) 937-6499