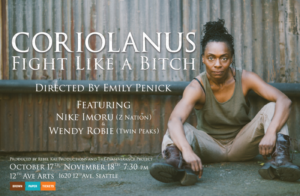 Shakespeare’s Coriolanus, a lesser known tragedy, appeared around 1608 following its more famous peers like Othello and Macbeth. Despite being set in ancient Rome, the play is thought to mirror the political environment that Shakespeare was writing in; the redistribution of power between England’s governing body and its people. Since its creation, Coriolanus has been used to make many, varying political statements from the depiction of modern fascism to the support of communist regimes in the early 20th century. The political questions dealt with in Coriolanus have proven themselves to be timeless.

Director Emily Penick’s most notable alteration of Coriolanus is her all-female cast. Traditionally, only men acted in Shakespeare’s plays and played even women’s roles. Penick’s Coriolanus takes place in a world where only women exist. The women of this cast prove nothing is lost when a woman plays a role traditionally meant for a man. Apparently all it takes is changing a couple pronouns to “fight like a bitch”. Additional rewrites include a minimal set, trendy costumes, and modern music which work together to communicate that this production takes place right now. Costume designer Nova Dobrev did an excellent job in choosing up-to-the-minute trends. From the first scene it was apparent this performance was present day from the denim-on-denim look that Ayo Tushinde’s character was sporting. The contemporary details ask the audience to consider the relevancy of the political struggles in Coriolanus in today’s political setting.

Nike Imoru’s performance of Coriolanus is reason enough to see 12 Ave Arts’ Coriolanus. Shakespearian language seems native to Imoru. At times she seemed to be speaking to the audience when addressing an angry mob of peasants on stage, showcasing her ability to connect with her audience and draw them in closer. Her comfort with this dialogue attributed to the swagger that she brought to her character. Again, nothing was lost on the character of Coriolanus from Imoru’s performance. Her performance was a testament to the wider range of roles that women in theater deserve.

Wendy Robie, who played Volumnia, was also a master of Shakespearian language. She too was a treat to listen too.

The stage was a point of interest. Being very bare and minimal, it lacked any sense of place. It seemed like the performance could be taking place anywhere, emphasizing the prominence of such political struggles. However, the stage also resembled a catwalk causing the actors to appear like models in a runway show, which somewhat distracted from this very effort. The length of the stage also created a lot of distance between cast members. This proved awkward at times when the audience was forced to look at only a single or several actors at a time because the rest were far out of their line of sight. On the other hand, the length of the stage did make it easier for the opposing parties, such as the common people and the ruling class, to establish themselves simply by distancing themselves from one another. This helped to ease the process of following a Shakespeare play.

The cast of Coriolanus: Fight Like a Bitch did Shakespeare justice. A trip to 12th Avenue is well worth it.