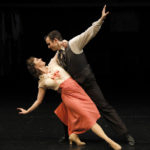 Director George Mount notes that Seattle Shakespeare has been nurturing the idea of a 40’s musical style A Midsummer Night’s Dream for twenty years. Their vision finally hits the stage in the troupe’s closing production for the season. Nir Sadovik wrote the original tunes used for the show. The concept: put Shakespeare’s lines directly into 30’s and 40’s style songs and intertwine the tunes within the Midsummer script. The result of the experiment: middling success. It is really hard to grasp The Bard’s intricate poetry sung within a big band melody. Often the lyrics, uniformly sung well, simply washed over me. None of these factors kept the play from working its magic; for at the end of the night, this company really knows how to stage one of Shakespeare’s greatest comedies.

The evening does get off to a somewhat shaky start. The opening song features snippets from some of Shakespeare’s love sonnets. At this point, it is a bit tough for the audience to figure out where we might be going with the concept. Choreographer Crysal Dawn Munkers enlivens the number with some delightful Busby Berkeley style formations.

Once the actual script kicks in, we’re on much surer footing. George Mount takes on the role of Duke Theseus; now transformed to “Duke” Theseus Athens, owner of the “Palace Woods” a Broadway Revue house. Mount seems to be having a ball as he applies a feather-light touch to his part—overseeing the actors and crew that populate his establishment with a gentle hand. Crystal Dawn Munkers is his bride to be, if he plays his cards right.

The two sets of young lovers in the story are fashioned to be ingénues somewhat akin to the likes of Ruby Keeler and Dick Powell. Mallory Conney King brings a Broadway-ready voice to her part as Hermia. Casey Raiha and Adam St. John take on the roles of the two enthusiastic suitors. They both have show stopping moments of hilarity and excel in some jaw dropping physical comedy. Keiko Green is a flat out delight as the young Helena. I’ve enjoyed everything Green has done with this company, but she is really coming into her own with this production. Her character is at first loved by no one and then through some midnight magic, loved by all. The thoughtful and focused work she does here helps ground some of the madness that might otherwise nudge the play into silliness.

Terrence Kelley is a most impressive Oberon, King of the Fairies and apparently the star of Duke’s show. His Shakespearean chops are in top shape here. Chorus girls effectively take on the parts of the dutiful fairy underlings. A real knockout punch for this production is John David Scott’s tap dancing fairy-servant Puck. Here the 40’s musical concept works best—for Puck’s lines are often easier to understand and very rhythmic. It is a joy to watch him jet off on his missions, always ready to please his master Oberon. He will simply tap his way into your heart.

The role of Bottom is one of my favorite characters in all of Shakespeare. The boastful plumber is magically transformed into an ass by Puck, courted by a lovely fairy- queen, then turned back into himself. He finally ends up playing the romantic lead in the closing show within a show. MJ Sieber is more than up to the task here. Bottom’s childlike enthusiasm and confidence in his skills, no matter how ill placed, make for some wonderful comedic fun.

Before we know it, all our lovers are properly paired off and ready to call it a night—acknowledging that everything we witnessed may be simply the “fierce vexation of a dream.” But what a magical dream it is! Celebrate this Midsummer Night before it slips away.

Seattle Shakespeare’s A Midsummer Night’s Dream runs through May 21 at the Cornish Playhouse in the Seattle Center. For more ticket information go to seattleshakespeare.org.