Searing acting, tense and thought provoking lines and the powerful energies of fear and deep sadness. Frozen is an arresting play. Delving into outrightly difficult territory- exploring a serial killer and those affected by him, this play asks hard questions. The play asks us to explore the difference “between a crime of evil and a crime of illness.” We’re asked to grapple with the idea that people are perhaps not born evil but act evil due to circumstances beyond their control. A combination of child abuse, physical damage to the brain and psychological impairment are offered up as reasons why a human could commit horrific acts against other humans.

Written by Bryony Lavery and first performed in Britain in 1998, Frozen is now playing at Artswest Playhouse in West Seattle. The play is directed by Mathew Wright (who also directed Dogfight and Little Women). There are just three superb actors, all of whom hold our attention for the just over two hours’ production. Amy Thone, plays Nancy. Nancy is the mother of Rhona,a girl abducted, sexually abused and killed by the serial killer. Amy’s acting is measured and so coolly seductive. She commands the stage well with her clear delivery and her ability to make us believe she is really that horrified, angry, sad but utterly ordinary woman who we find so easy to relate to. Peter Crook is stunning as the lascivious, disgusting, pathetic and sometimes human serial killer, Ralph. Jonelle Jordan plays the highly strung and energetic psychologist called Agnetha. She skillfully explains the psychological and neurological issues motivating Ralph’s desire to harm and kill people. Amid her scientific questing of Ralph, Agnetha also manages to do the impossible- uncover some of Ralph’s human frailty. 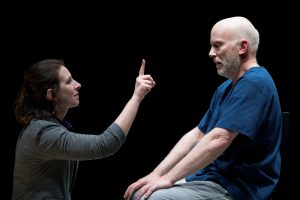 The stage setting is deceptively simple but effective. It’s just three stages, rimmed by lights and with a minimum of props. The stage crew effectively use lighting and sound to enhance the atmosphere and support the actors well.  For most of the production there’s just one actor on stage. Each of the actors is so engaging that the audience remains riveted on their movements and the messages they impart to us.

Bryony Lavery’s script is mostly well crafted and explores many complex ideas. While trying to differentiate between evil and illness as causes of criminality, the play also explores the way in which people can be “frozen” in their lives. The psychologist, Agnetha elucidates how Ralph’s damage has frozen some of his human capacity. He doesn’t have the capacity to make connections with other people. Nancy is frozen in her ability to live in the moment. During Ralph’s trial, when Nancy is unable to secure Rhona’s remains for the funeral, Nancy laments. She says, “I am near to being not alive anymore as I have ever been.” While I found this line powerful, an earlier line of Nancy’s was less effective. I wish she did not say, “it was like my heart was torn out of its chest.” While we can all understand what she is trying to express, the line is so hackneyed that it fails to resonate. However, it does reinforce Nancy’s blinders. While Nancy focuses on her abducted child, she fails to invest emotional energy into her relationship with her husband and especially with her other daughter Ingrid. While Ingrid is never physically present in the play, the many references to her via Nancy, bring Ingrid alive as an important character. Ingrid in some ways is the vehicle that helps Nancy grow as a character and realize the means to move on from Rhona’s death.

You might expect that a play about a serial killer is solely serious. While there are many ugly and chilling moments, the play has balance. Frozen manages to deliver interludes of humor. Agnetha hits the right funny bone note at times. After a harrowing and graphically noisy, fear- of- flying anxiety attack, Agnetha yells out to her neighbor, “Sorry Mrs Lipky, the big noise is leaving.” Ultimately amid the horror and the pain, the fullness and tenacity of our uneven humanness pulls through. Highly recommended. Not appropriate for those under 18 years of age.