Have you ever overheard a snippet of an interesting conversation and wished you could hear the rest? Love Train, a new play written and directed by Adam Hutchinson, presents an opportunity to eavesdrop on three roommates on their way back to Seattle from Vancouver, B.C. as they sort themselves out after an eventful vacation. The […] 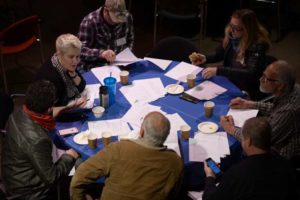 [Note: This is a review of the closing performances of the festival on Jan 13th and 14th. R.E. Parker reviewed the first weekend of the festival here and here.] Michael Neff and Jodi-Paul Wooster organized their first 14/48 Festival in 1997 as a one-time event. Now in its 20th year, 14/48: The World’s Quickest Theater […]

The Trojan Women-adaptation of Euripides Play, As relevant today as in 415 B.C.

The Trojan Women explores the Class, Racial and Sexual Politics of War

An intense but highly intriguing adaptation of Euripides’s The Trojan Woman, by Caroline Bird opened at Seattle’s favorite venue for plays taking place in prisons: The old Immigration Jail, now called The Slate Theatre. Produced by Civic Rep Theatre, the play offered a scintillating exposé of the interconnection between war and rape, of the rationalizations of the powerful as they evade their responsibilities and avoid making amends, how the wives of the powerful, accepting of their “feminine” roles, use power ruthlessly and of course, how the poor and disenfranchised pay the ultimate price for war. All this wrapped up in a coherent script, sprinkled with poetic witticisms, which honored the classical text and our modern theatrical conventions. 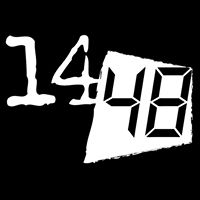 Two days, fourteen new plays. With lots of laughs and some moments of compelling drama, the second night of “The 14/48 Project” is just as skillfully executed and fun as the first.
If you’ve been to the festival or read my review from Friday’s 10:30 p.m. show, you know how “The 14/48 Project” works. The plays I saw at the Saturday 8 p.m. show were written between the playwrights receiving the prompt “Taking a Shot” on Friday night and 8 a.m. the next morning. After being assigned to plays by random drawing, the directors and actors tackled seven more new plays. The pieces I saw on Saturday night premiered after forty-eight hours of new theatre creation by an adventurous group of artists.
The atmosphere in the Gregory Falls Theater was significantly different at this Saturday World Premier show. The audience was larger and older on average. An audience member could overhear conversations between friends of the performers, or between middle-aged, male theater figures scouting talent…

Two days, fourteen new plays. “The 14/48 Project: The World’s Quickest Theater Festival” is as fun as it is impressive.
First performed in 1997, 14/48 is an even more challenging spin on the traditional 48-hour theater festival format. On Thursday evening, the artists involved kick off the festival by tapping the ceremonial 14/48 keg. A theme is then chosen at random for the writers. The seven playwrights get started on a ten-minute play on that theme (this time, “Who’s Watching Who”), which is due the following morning at eight.
On Friday, each of the seven directors is randomly assigned one of these plays. The casts are chosen (also by random drawing) soon after. The directors and actors rehearse the pieces for the rest of the day. They are joined by the not-to-be-underrated design team. The festival band contributes music and other sound. The seven new plays have their world premieres at 8 p.m. on Friday, and their final performances at 10:30 the same night.