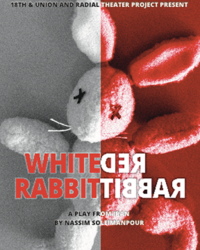 I watched the Seattle premiere of a play in search of a genre: White Rabbit Red Rabbit By Iranian Nassim Soleimanpour at 18th and Union. Billed as a one-act play for an actor that has never read the script, the show also draws into the performance lots of people in the audience.

In the role of “the actor” this evening was Kate Jaeger. Most recently she served as the co-host of this year’s Gregory Awards. She is experienced with scripted roles as well as improv. Perfect for this project as Soleimanpour’s script requires both skills in roughly equal measure. She can be lithe and limber when imitating the strut of a species of non-flying birds, or quite sober when the script demands it. A couple of times the audience went off script and applauded and her face responded and she egged us on. Quite early, then, she communicated, “no one here knows what will be asked of us, so let’s relax and enjoy ourselves as much as possible.”

Soleimanpour, at times, through the actor, speaks in his own voice. When asked near the start to count off, the script/Soleimanpour plays with our understanding of what he has engaged us in by reminding us to count also the actor, and himself. He asks that a seat in the front row be left empty for him to sit in.

Soleimanpour like all true artists know he counts. He wrote this play in 2010 in Iran, where it could not be produced. As a conscientious objector to the mandatory military service (something he shares about his life in the play) he could not travel. The play requires minimum props and furniture, several of which are supplied by the audience. Thus when Soleimanpour shared his work via email with producers at Fringe festivals, he had found his outlet. In 2011, White Rabbit Red Rabbit opened at both the Edinburgh Festival and the SummerWorks Festival in Toronto.

Without revealing much of the details so as not to spoil it, there is a great deal of audience participation involved. My straw count showed 13 audience members engaged in some active form such as stepping onto the stage with “the actor” as commanded in the script. And three more people offered props when prompted, and one took notes when the script and “the actor” requested. Another took pictures when asked. Disclosure: at this performance I took the notes. 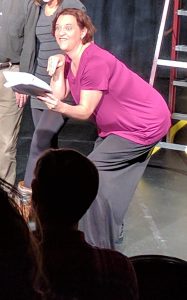 Though a one-act performance there were distinct sections. Soleimanpour—via Ms. Jaeger—reflected on the nature of hope in his situation, how cultures create and replicate themselves, and the meaning  and importance of owning our choices.

You will note at the bottom of this review a list of the performers for the role of the actor.

Go see this show in search of a genre. Though it’s been translated into 22 languages and performed thousands of times, due to the unique dynamics of the particular actor you catch, and the particular audience that attends, you are guaranteed a unique one-off experience.